Tony Blair, the former British prime minister, has been recalled to a public inquiry into the Iraq war to give more evidence about the conflict.

John Chilcot, the chairman of the London-based inquiry, said on Wednesday that Blair, who took Britain into the 2003 conflict, was among 12 people who had been asked to make a second appearance.

“As we draft our report it is clear that there are some areas where we need further detail,” he said in a
statement.

“We will, therefore, be seeking further evidence on those matters.”

The others include Jack Straw, the former foreign secretary and Michael Boyce, former chief of the defence staff. Peter Goldsmith, Britain’s former attorney general, has also been asked to provide further written evidence.

Blair last appeared before the inquiry in January, where he angered relatives of British soldiers killed in Iraq by saying he had no regrets about his decision.

He told the inquiry at the time he felt “responsibility but not a regret for removing Saddam Hussein”.

The former leader was heckled for his comment, with one member of the audience shouting “What, no regrets?”, while another branded him a “liar” as he left.

His next appearance, expected to be held between late January and early February next year, was expected to bring further protests, a campaign leader said.

Lindsey German, convener of Stop The War Coalition, said she hoped the inquiry would “take a tougher attitude towards Blair, especially given what we now know from the WikiLeaks revelations about his part in the war.

“I really hope that his evidence will be part of preparations for further action against Blair, hopefully in a court of law,” she was quoted by the AP news agency as saying.

“We will give him a very warm welcome, just as we mobilised protests against his last appearance before the committee.”

Clare Short, Britain’s former international development secretary and long-time critic of Blair, disputed evidence Blair had given when she appeared before the five-person inquiry a few days after him.

Short said he had not wanted Iraq discussed in the cabinet because he feared leaks to the media.

The decision to go to war alongside the US was the most controversial of Blair’s 10-year leadership, provoking huge protests, divisions within his Labour Party and accusations he had deceived the public about the reasons for the invasion.

After nearly three terms as prime minister Blair stood down in 2007 and was replaced by Gordon Brown, who lost the election in May this year. 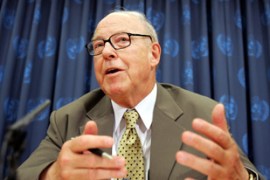 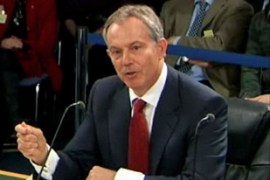