Spain’s government has said that the country’s airspace has reopened after a strike by air traffic controllers grounded flights and left thousands of travellers stranded.

An official with the civil aviation agency AENA said it got the all-clear from Eurocontrol, Europe’s air traffic agency, to allow flights into Spain’s airspace on Saturday afternoon following the return to work of sufficient numbers of strikers.

Jose Blanco, Spain’s transport minister, said returning to “normality will take some time, between 24 and 48 hours, if the controllers return to work as they must”.

Officials said that 250,000 people had been affected by the walkout, prompted by a long-running dispute over working hours.

Almost all flights in and out of the country were cancelled until Sunday morning.

The government declared a state of emergency after air traffic controllers failed to show up for work on Friday.

“We said that if the situation in the airports did not normalise, we would call a state of emergency,” Alfredo Perez Rubalcaba, the deputy prime minister, said after an emergency cabinet meeting on Saturday.

Rubalcaba said that if the controllers did not return to work they would be breaking the law. He said the air traffic controllers were trying to protect “unacceptable privileges”.

The emergency declaration came after the Spanish military took control of the nation’s airspace on Friday.

It was the first “state of alert” in Spain since the death of General Francisco Franco in 1975.

Guy Hedecoe, the co-editor of the Spanish news website qorrea.com, speaking from an airport in Madrid, said many of the stranded passengers were angry.

“There is a broader feeling across Spanish public opinion that air-traffic controllers get a pretty good deal,” he said.

“In this airport people seem really angry at the airport and are directing their anger at the [air traffic controllers] and not the government.”

The controllers gave no warning before the walkout, taking sick leave to abandon their posts en masse at around 1600 GMT on Friday, effectively closing the whole of Spanish airspace, except for Andalucia, the airport authority said.

Rubalcaba put the army in charge of all decisions on air traffic control, organisation, planning and supervision.

The mass walkout by traffic controllers, locked in a long-running dispute over pay and conditions with AENA, the state-run airport authority, came hours after the government approved plans to sell off 49 per cent of AENA in an attempt to tackle it debt crisis.

The government, also on Friday, approved controls over the number of hours air traffic controllers can work per year and passed a law allowing the army to take over air space in times of emergency.

A spokesman for the Syndicate Union of Air Controllers said this meant time taken for paternity or sick leave would not count within the maximum working hours.

“We have reached our limit,” Jorge Ontiveros, the union spokesman, said.

Tourism accounts for around 11 per cent of Spain’s gross domestic product (GDP).

Friday’s travel disruption would lead to millions of euros in losses for the tourist industry and would damage Spain’s image as a holiday destination, the Spanish Hotel Confederation has said. 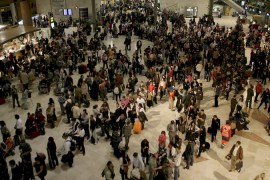 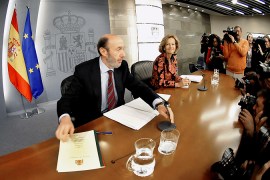 Emergency cabinet meeting backs plans to raise the the pension age to 67 after controversial asset sales were announced.