Israeli officials have said they hope to have a deadly wildfire sweeping through the country’s northern forests under control later on Sunday.

The fire, the worst in Israel’s history, has been tearing through the Carmel forest since Thursday, killing at least 41 people, and forcing the evacuation of more than 13,000 people.

It has scorched more than 7,000 acres of drought-afflicted land, destroyed houses and revealed dramatic shortcomings in the country’s ability to tackle such an emergency.

Responding to an appeal for help from Binyamin Netanyahu, the prime minister, countries in the immediate region and as far afield as Russia and the US have sent planes, firefighters and materials to help battle the blaze.

He also said that while it will take days to extinguish the fire completely, he hoped it might be brought under control on Sunday.

Although the forest fire is small by international standards, it is considered a calamity in Israel, where only seven per cent of the land is wooded.

The Carmel forest makes up five per cent of that forested land and nearly half of it has been destroyed in the fire.

Meanwhile, the battle to contain the fire is now an operation with regional implications.

Mahmoud Abbas, the Palestinian president, expressed condolences in a rare telephone call with Netanyahu on Saturday over the deadly fires, Israeli officials said.

The two leaders were not believed to have spoken since they last met in September when US-backed peace talks stalled in a spat over Jewish settlement construction.

A statement from Netanyahu’s office said Abbas “expressed his condolences to the people of Israel on those who died in the fire and said he would be happy to provide any necessary help”.

In the conversation described as “warm and friendly”, Netanyahu replied that “neighbors should always help each other”. 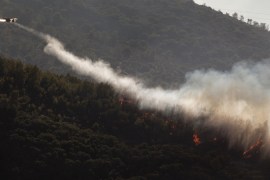