Flooding caused by swollen rivers after heavy rains has forced thousands of people from their homes in Albania, Bosnia, Serbia and Montenegro, officials have said.

More than 7,000 people were moved to safer areas in Albania, where Sali Berisha, the prime minister, described the situation as “very serious”.

Berisha said that “millions of hectares of land are flooded, over 7,000 people are already evacuated and the evacuations of other families threatened by the flood water continues”.

Thousands of houses were damaged and roads linking Tirana, the capital, to the north of the country were completely blocked, according to local authorities.

In Bosnia, authorities declared a state of emergency for the eastern towns of Bijeljina, Visegrad and Zvornik along the Drina river which is the natural border between Bosnia and Serbia.

Troops moved in to the villages surrounding northeastern Bijeljina after some 1,000 homes were flooded and the inhabitants were evacuated.

Attributed to the fast flow in the Drina, “two-thirds of the village was flooded within several hours”, Drago Ristic, a local official, told local media.

Across the border in Serbia, at least 1,400 people were evacuated from the town of Loznica.

More than 3,000 more people were at risk from the flooding of the Drina in the area of Loznica, the country’s interior ministry has said.

In Montenegro, around 1,300 people were evacuated due to the “unprecedented” floods that hit the country, Ivan Brajovic, the interior minister, said. 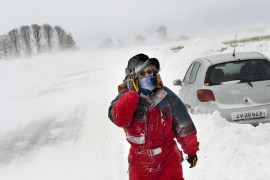