Dozens of people have been injured on Easter Island after riot police evicting islanders from their ancestral home were faced with stone-throwing protesters.

The clash began early on Friday when police moved to evict 10 people from the home they had been occupying since ousting a government official from the property, the Associated Press reported Maka Atan, a Rapa Nui lawyer, as saying.

Rapa Nui is the official native name for Easter Island, famous for its gigantic stone figures known as Moais, and many natives use the term to identify themselves.

The islanders resisted the police’s eviction attempts and the violence left 17 officers and eight civilians hurt, according to police.

Protesters said that 19 islanders were injured and denied seeing any police hurt.

Islanders said the police of used batons and pellet guns against the crowd.

Three islanders and one policeman were taken to mainland Chile, which annexed Easter Island in 1888, for treatment.

A woman who answered the local government official’s phone in the island’s main town of Hanga Roa said there would be no official comment on Friday’s violence, the Associated Press reported.

In recent years, tourism and migration have increased pressure to control the available land on the island, which is just 16km by 24km.

About a dozen buildings are being occupied by Rapa Nui, who say Chile illegally took their family’s ancestral homes generations ago.

Chilean media reported that an aeroplane carrying police reinforcements was on its way to the island. 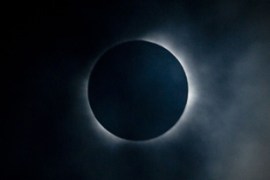