The US is considering a range of legal options against WikiLeaks founder Julian Assange, who is an Australian national.

A senior US defence official said lawyers from across US government agencies are studying whether it might be possible to prosecute Assange under the Espionage Act.

The official said lawyers from the departments of Justice, State and Defence are among those looking into how to handle the release of sensitive diplomatic messages by WikiLeaks.

The defence official spoke on condition of anonymity on Tuesday to be able to discuss internal deliberations.

He said lawyers are trying to determine whether the Espionage Act applies in this case, what individuals it might apply to and whether it’s possible to use it against the WikiLeaks organisation.

Eric Holder, the US attorney general, said on Monday that there is an “active and ongoing criminal investigation,” and that the website’s chief would be pursued if he were found to have broken the law.

The White House has branded those who released the documents “criminals, first and foremost,” but so far US authorities have publicly filed no charges against Assange.

Australia is also considering legal action against Assange. Australian police said they had begun investigating whether any of the country’s laws were broken by the release.

Kevin Rudd, the Australian foreign minister, said the unauthorised release of diplomatic communications had been a major problem for every nation state in the world.

“We, the Australian government, condemn it because it helps nobody,” he told Al Jazeera on Tuesday.

“The reason we have diplomacy is that it remains private. This [leak] has fundamentally undermined that and I believe those responsible for it should be held accountable.”

Meanwhile, Interpol has placed Assange on its most-wanted list after Sweden issued an international arrest warrant against him as part of a drawn-out rape investigation.

The France-based international police organisation has issued a “red notice” for Assange, the equivalent of putting him on its most-wanted list.

The issuance by Interpol was expected after a Swedish court in mid-November approved a motion to have Assange brought in for questioning.

The notice, posted on Interpol’s site on Tuesday, is likely to make international travel more difficult for him.

The United States has ordered security to be tightened on its military’s classified computer network following the leak.

Reeling from disclosures of the cables, the State Department disconnected access to its files from the government’s classified network on Tuesday.

The move dramatically reduces the number of employees inside the government who can see important diplomatic cables.

‘Weaknesses in the system’

PJ Crowley, a State Department spokesman, said the decision was temporary, at least until workers correct what he called “weaknesses in the system that have become evident because of this leak”.

The new information “big chill” is reversing almost a decade of post-September 11 efforts to nudge US officials into sharing sensitive documents.

The Pentagon has also detailed new security safeguards, including restraints on small computer flash drives, to make it harder for any one person to copy and reveal so many secrets.

Bradley Manning, an Army private, is charged in military court with taking classified material that was later published by WikiLeaks, a self-styled whistleblower organisation.

Officials said Manning is the prime suspect in the leaks partly because of his own description of how he pulled off his heist of the restricted cables.

“No one suspected a thing,” Manning told a confidant afterwards, according to a log of his computer chat published by Wired.com. “I didn’t even have to hide anything.”

Manning is being held in a maximum-security military jail at Quantico, Virginia, and though he has so far not been charged in the latest release of internal US government documents, WikiLeaks has hailed him as a hero.

WikiLeaks this week published some of more than 250,000 diplomatic memos that were never intended to be read outside the US government.

Nato has slammed the disclosure of the sensitive files as “illegal, irresponsible and dangerous”. But the most scathing criticism has come from the US.

Hillary Clinton, the US secretary of state, called the release “an attack on the international community”, adding that WikiLeaks acted illegally in posting the material.

Assange said on Tuesday that Clinton should resign if it is shown US diplomats were ordered to engage in espionage.

The WikiLeaks founder took aim at Clinton in an interview with Time magazine that was conducted from an undisclosed location over the Skype internet phone service.

Clinton “should resign, if it can be shown that she was responsible for ordering US diplomatic figures to engage in espionage in the United Nations, in violation of the international covenants to which the US has signed up,” he said.

The classified dispatches containing the spy instructions for US diplomats were divulged last weekend in the documents published by WikiLeaks.

State Department officials on Tuesday denied that American diplomats were required to spy.

The officials said that secret instructions to American diplomats to gather sensitive personal information about foreign leaders originated with the US intelligence community.

The officials said American diplomats were free to ignore the requests and that virtually all do. 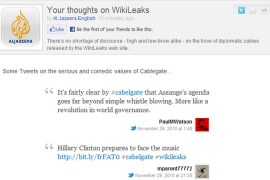 Your reactions to WikiLeaks release 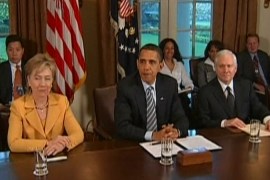 US ponders action over leaked memos

The United States says it may take legal action against those behind “US Embassy Files” revelation. 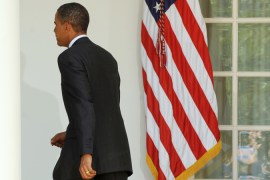