Supporters of the main challenger Alassane Ouattara on Tuesday accused Laurent Gbagbo, the incumbent president, of trying to block the first results because, they said, he knew he had lost.

A news conference held on Tuesday to start announcing the result was cut short when pro-Gbagbo members of the election commission tore up results as a spokesman tried to read them out.

Al Jazeera’s Yvonne Ndege, reporting from Abidjan, said the chaotic scenes at the election commission have caused a stir in Cote d’Ivoire.

The poll aims to reunite Cote d’Ivoire after its northern half was seized by rebels, but the electoral
battle lines during the campaigns looked ominously similar to the ethnic and territorial ones of the 2002 conflict

The pro-Gbagbo members of the election commission accused the body’s spokesman of “an electoral hold-up” before tearing up a sheet of results.

One shouted that the results had not yet been consolidated so could not be read out.

Gbagbo’s party said it would formally challenge the results in the rebel held north, where his rival Alassane Ouattara did well in the first round, because of intimidation by rebel New Forces soldiers of Gbagbo’s supporters.

“The presidential camp is trying to prevent the proclamation of the results,” Marcel Amon Tanoh, Ouattara’s campaign director, said earlier in the day.

“If Mr Laurent Gbagbo knew he’d won, he wouldn’t have … prevented the CEI [commission] from speaking on the radio and TV … Gbagbo knows he’s lost.”

Representatives of Gbagbo’s campaign were not available to respond to the accusation.

Hillary Clinton, the US secretary of state, called on “Ivorian leaders to act in a responsible and peaceful manner.”

“We strongly urge candidates to allow the counting and announcement of the results to take place without interference and to respect the results that are announced,” she said.

Bursts of gunfire rang out in central Abidjan on Tuesday evening but it was not clear who fired the shots.

Earlier in the day, security forces were deployed around the election commission’s Abidjan office, which was blocked off with a barrier.

Journalists who had been waiting for results inside the building were told to leave, witnesses said.

The United Nations has said the poll had been democratic despite some irregularities, intimidation and violence, and the African Union urged candidates to accept the results.

International observers, including the European Union, have all noted violence and irregularities but said it was too early to know if it would alter the result.

“Both sides have been prone to provocative claims against the other and should base any election complaints on evidence,” the Carter Center observer mission said, calling on the election commission to stem the spread of rumours by announcing results. 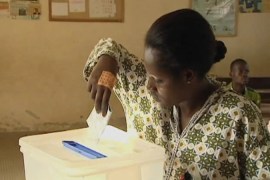 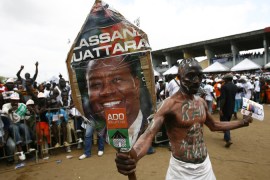 At least three people killed in scuffles between crowds and police in the lead up to Sunday’s presidential run-off. 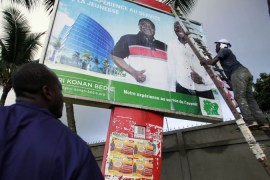