Barack Obama, the US president, has urged India to relax trade and investment barriers in order to boost economic relations between the two countries.

Obama, who is on a three-day visit to India, said the growing economic power must make “a steady reduction in barriers to trade and investment” in sectors from retail to telecommunications.

“New jobs and growth flow to countries that lower barriers to trade and investment,” Obama said on Saturday at a business meeting in India’s financial capital, Mumbai.

“As we look to India today, the United States sees an opportunity to sell our exports in one of the fastest growing markets in the world. For America this is a jobs strategy”.

Obama said that US companies were finalising deals worth around $10bn.

US has called on India to ease restrictions to foreign investment in sectors such as retail, defence, agriculture and insurance.

In particular, the business lobby has been pushing the country of 1.2 billion people to open up its giant consumer market to foreign store chains.

Foreign groups such as the US retailer Walmart can only operate as wholesalers and must partner with domestic firms to sell in India, amid fears that big Western retail chains could swamp small family-run stores.

“I have no doubt we can do much better, there is no reason why this nation can’t be one of our top trading partners,” Obama said.

Deals include previously announced transactions involving General Electric for aircraft engines and gas turbines, and Boeing for 737 passenger jets. But details on a key $4.5bn sale by Boeing of C-17 military transport aircraft were still being ironed out.

“This really includes India as a major player in a non-proliferation world … and it recognises the nature of the strategic relationship we now have with India,” Froman said.

The four regimes are the Nuclear Suppliers Group; the Missile Technology Control Regime; the Australian Group, which aims to reduce the spread of chemical and biological weapons; and the Wassenaar Arrangement, a multinational effort to control the transfer of conventional arms and dual-use
technology.

Obama will remove almost all of the remaining Indian defence and space organisations from a list of entities maintained by the US government to curb proliferation, and relax so called dual-use rules for Indian firms that regulate technology with both civil and defence applications.

“We will end up treating India similar to other close allies and partners other than as a country of concern,” Froman said.

“He is reaching out to Indian businesses. The technology which was previously barred for India is now being given to them,” she said.

“However, the deals are going to give a lot more jobs to Americans than to Indians. Indians would like to see a shift in American policy towards them in terms of protectionism.

“We know that outsourcing cuts have hit the Indian IT industry quite badly. Sixty per cent of Indian IT projects have come from the US and that ban is quite likely to hurt them even more.”

Obama is to spend three days in India, as part of a 10-day tour of Asia. He will travel to the Indian capital, New Delhi, on Sunday to meet with the Indian prime minister.

During his stay in Mumbai, Obama is staying at the Taj Mahal Palace and Tower hotel, the scene of deadly fighting when a group of armed men attacked several landmarks across the city in 2008, claiming 166 lives. He made his speech on Saturday at the Trident Hotel, another of the sites of the deadly attacks.

After arriving in Mumbai, Obama met survivors of the attack and paid tribute to those who died, hailing the hotel as a symbol of India’s “strength” and “resilience” and said the US and India “stand united” against such attacks.

Al Jazeera’s Rosiland Jordan, reporting from Mumbai, said it was an opportunity for Obama to bring to the forefront the issue of dealing with “insurgent groups around the world”.

But Indian commentators quickly seized on his failure to mention Pakistan – the home of the 10 assailants, the place where they trained and the base they used to launch the attack.

Pakistan is India’s traditional foe, but a crucial partner for Washington and its allies in the war in Afghanistan. 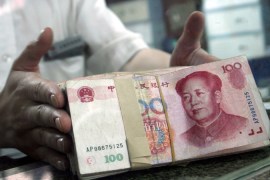 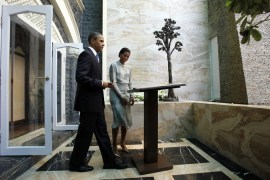 Obama in India on Asian tour

US president arrives in Mumbai on first leg of 10-day tour to four countries aimed at boosting trade. 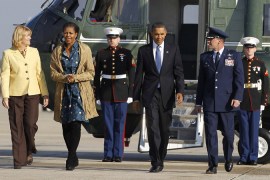 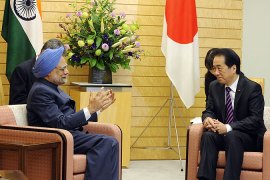