Al-Qaeda in the Arabian Peninsula says it orchestrated a failed bomb plot on cargo headed for the US last month, and it also claimed responsibility for the crash of an aircraft in Dubai in September.

The claims were made in a statement published by the Yemen-based group on al-Qaeda-linked websites and subsequently translated by the SITE Intelligence Group on Friday.

SITE said that Al-Qaeda in the Arabian Peninsula (AQAP) called for more explosive parcels to “enlarge the circle of its application to include civilian aircraft in the West as well as cargo aircraft”.

Two bomb attempts in October were foiled by security services in the UK and Dubai, where parcels containing the explosives were in transit, having originating from Yemen.

AQAP also said that it was behind an incident on September 9 when an aircraft belonging to UPS, the US delivery firm, crashed near Dubai in the United Arab Emirates.

The group claimed it had planted a bomb on the airliner, but that the authorities had kept the cause of the crash quiet.

“We downed the plane belonging to the American UPS company, but because the media of the enemy did not attribute responsibility for this work to us we kept quiet about the operation until the time came that we hit again,” it said.

Ali Al Ahmed, director of the Institute for Gulf Affairs in Washington DC, told Al Jazeera that the claim of bombing the UPS airliner was a surprise as, “nobody knew it was the work of al-Qaeda until they came forward with this statement”.

“Even the CIA and regional intelligence services didn’t know this was brought on by a bomb.”

Ahmed said that authorities might have missed any explosive residue in the crashed aircraft as cargo airliners are not as thoroughly checked as passenger aircraft.

“The problem with this targeting is that it is hard to stop because you are talking about thousands of planes and thousands of packages that mostly do not get checked before they are put on a plane.”

The UAE aviation authority said on Saturday that it is investigating the al-Qaeda claim, but has found no link so far.

“So far we have no evidence that links the UPS plane crash with a terror attack. There is no evidence of explosives on board,” Saif al-Suwaidi, director general of the UAE’s General Civil Aviation Authority, told the Reuters news agency.

Governments around the world have tightened security surrounding freight coming from Yemen after the two parcel bombs, addressed to synagogues in Chicago, were discovered at a UK airport and in a cargo terminal in Dubai.

The incident prompted Britain to ban unaccompanied cargo freight to the UK from Yemen and Somalia.

The Netherlands and Canada suspended all cargo flights from Yemen, and France and the US also banned air freight from Yemen in response to the plot.

Germany extended its ban on cargo aircraft from Yemen to include passenger flights, sparking shock from Yemen which described the decision as a “mass punishment”.

US authorities said that they knew al-Qaeda had planned to use international cargo systems several weeks before last week’s foiled plot.

At least one of the bombs was hidden inside a computer printer with a circuit board and mobile phone SIM card attached.

The bomb was said to contain pentaerythritol trinitrate (PETN), a highly potent explosive which is difficult to detect in security screenings. 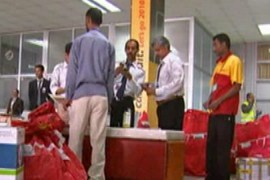 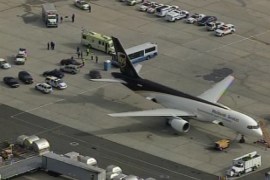 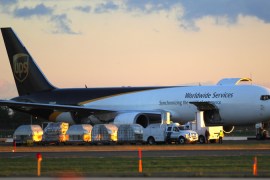 Man thought to be linked to the group believed to be behind last week’s air cargo bomb plot detained earlier this year. 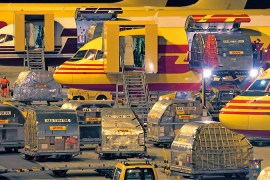