With all votes counted from Sunday’s election, the third in the former Soviet republic in less than two years, the three-member liberal alliance had 52.1 per cent of the vote, the election commission said on Monday.

The figure translated into 59 seats for the coalition, just short of the 61 needed to elect the president and overcome Communist Party resistance to a leader who could pull the tiny republic further from its Soviet past.

The Communist Party took 39.3 per cent of the ballots and 42 of the 101 seats, the commission said, enough to continue a political stalemate that has left the country without a full-time president for more than a year.

International observers from the Organization for Security and Co-operation in Europe (OSCE) and the Council of Europe said the vote met most international standards.

“These elections reflected the will of the people,” said the head of the OSCE Parliamentary Assembly delegation Tonino Picula in a statement.

The prime minister’s party came in well ahead of the others and is set to assume the leading role in any future leadership negotiations.

But the liberals have lost a vital fourth member – the Our Moldova Alliance that was part of the coalition since July 2009.

The loss of its five seats now looks crucial and the coalition appears certain to require the support of independents to win outright control.

“Any (coalition) is possible. Everything should be discussed,” Gimpu said a few hours into the vote count.

Filat said the liberal parties would discuss the “creation of future ruling coalition” as early as Tuesday.

The Communist Party blocked all previous efforts to pick a president who would use a stronger alliance with neighbouring EU member Romania to bring the country into Europe’s fold.

Communist leaders gave initial indications that they might yet challenge Sunday’s outcome. They said they were conducting their own vote count and confident of winning up to 65 per cent of the vote.

Moldova was part of Romania between 1918 and World War II, when it was annexed by the Soviet Union under Stalin.

It remains a Romanian-speaking country with strong cultural ties to Russia. 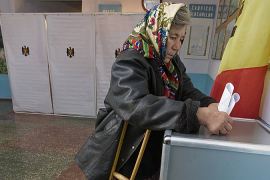 Liberal forces appear on verge of finally getting the votes necessary to appoint a new pro-Western head of state.