A teacher and all 23 students taken hostage by a student armed with a handgun have been released unharmed after an hours-long ordeal in a small Wisconsin school, authorities say.

“The incident has been resolved,” said Eric Burmeister, the director of emergency management in Marinette, Wisconsin.

“Students are now being reunited with their families.”

The armed student,  a 15-year-old boy who has only been identified as a sophmore, entered the classroom at the end of the school day on Monday, local media reported.

He held nearly two dozen other students and a teacher hostage, shot himself. Police officers heard three gunshots and they then entered the classroom.

Jeff Skorik, the Marinette police chief, said that the student was taken to an area hospital and his condition was not known.

Police officers entered the classroom after hearing three gunshots, no other students or the teacher were wounded, he added.

Skorik told a news conference that the suspect, a male student, did not make his motive known nor made any demands.

As far as authorities could determine, he said, the suspect was acting alone and was restricted to one location.

“We have no reason to believe that we have more than one actor,” he said.

“There have been some serious injuries reported on Facebook that we know are not true,” Skorik told reporters.

Zach Campbell, one of the students taken hostage, said that the gunman appeared depressed but did not seem like he wanted to hurt anyone.

The students were watching a film about Greek myths in class, when the teen pulled out a gun and shot at the projector, Campbell said. The gunman then fired another shot, he added.

Students tried to keep the gunman calm by talking to him about hunting and fishing.

Parents awaiting children they believed to be inside had been asked to gather in a nearby court building, Kathy Frank, a spokeswoman for the county emergency management, office said.

The high school has about 800 students, according to its website.

Marinette is in the north of the city of Green Bay, near Michigan’s upper peninsula. 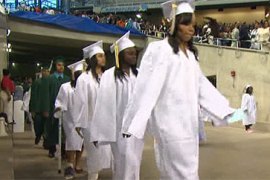