Slow voting, isolated protests, clashes and claims of vote rigging have marked Egypt’s parliamentary election, the result of which is expected to strengthen the ruling National Democratic Party’s (NDP) grip on power and further weaken the opposition.

Polls closed at 1900 (1700 GMT) on Sunday, with the NDP is expected to win a solid majority of the 508 elected seats and to make further gains when Hosni Mubarak, the president, fills the 10 remaining seats with his appointees.

The Muslim Brotherhood-  the only serious organised opposition, is predicted to win far fewer seats than the fifth of parliament it secured in the last election in 2005.

The group, which registers its candidates as independents to avoid a ban on religious parties, has 130 members on ballots after more than a dozen were disqualified.

First results are expected on Monday.

Polling stations had opened at 0800 (0600 GMT) across the country’s 254 districts, with around 41 million Egyptians eligible to vote.

Ayman Mohyeldin, Al Jazeera’s correspondent in Cairo, said that Egypt’s High Election Commission had ordered 16 polling stations across five governorates across the country closed due to reports of violations and violence.

In one of Cairo’s key districts, the candidate from the Taggammu party told Al Jazeera that more than 2,800 voters were allowed to cast their ballot twice, in two separate polling stations, because they were voting in favour of the ruling NDP candidates.

Meanwhile, witnesses said armed men dispersed a crowd outside a polling station in the city of Mansoura, before a local NDP candidate falsified 150-300 ballots.

Evan Hill, Al Jazeera’s correspondent in Mansoura, reported scenes of violence outside a polling station in the city.

Mohyeldin said there had been casualties across the country.

“In the city of Mena there are reports that voters in support of the Muslim Brotherhood were attacked by unidentified assailants,” he said.

Mohyeldin said there were also reports that several independent candidate representatives, affiliated with the Muslim Brotherhood, had been denied entry to polling stations.

“One of the people we’ve been speaking to, who is an officially licensed monitor to go in on behalf of one of the candidates, went to the school where he was supposed to be a monitor and was turned back,” he said.

In Suez, witnesses said hundreds of supporters of the Muslim Brotherhood and other opposition candidates demonstrated outside police headquarters to protest at not being allowed to enter the polling station.

Police said they used teargas to disperse clashes between supporters of rival candidates outside polling stations in Qena, 475km south of Cairo.

Witnesses said teargas was also used to clear supporters of independent candidates in Gharbiya, in the Nile Delta, after their delegates were prevented from entering polling centres to monitor voting.

More than 1,000 of its supporters have been arrested while campaigning or in clashes with police in past weeks.

Eleven of them were sentenced this week to two years in jail for handing out the group’s leaflets and campaigning.

Rights groups say Egyptian elections, which consistently reproduce NDP-dominated parliaments, are routinely spoiled by fraud at the ballot box, a claim denied by the government, which has pledged to hold a fair vote.

Local civil society groups have complained that the authorities rejected requests for thousands of permits to monitor the vote and the count, but the electoral commission says it granted more than 6,000 permits.

Only 10 per cent of observers who applied were granted permits to watch the voting and those who got them will be under tight restrictions, said rights activist Bahey-eldin Hassan.

Local monitors are not allowed to question election officials or voters.

The government has barred international observers as an infringement of its sovereignty.

“The elections are already fatally compromised,” Tom Malinowski, part of a delegation from the New York-based Human Rights Watch, said.

The NDP ran about 800 candidates. Legal opposition parties, the majority of which have no representation in the outgoing parliament, put forward about 450 candidates.

The election is being closely watched for an indication of how the government will conduct the more important presidential election in 2011.

Mubarak, 82, has not yet said whether he will run in the next election.

But the former air force chief’s eventual successor will most likely come from his ruling NDP or the military. 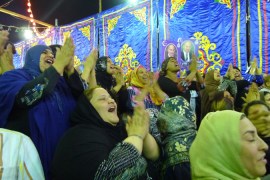 A new law guarantees 64 seats to female candidates, meaning a 1,500 per cent rise in female parliamentarians. 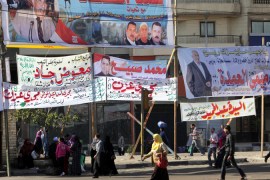 Residents set to vote in parliamentary polls following campaign marred by violence and crackdown on opposition. 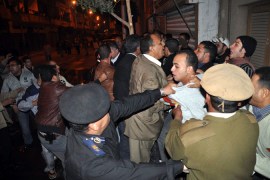 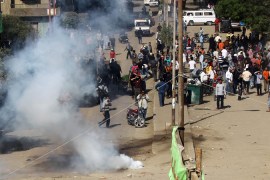