A return to civil war in Sudan would cost the country, the region and the international community more than $100bn over 10 years, says a new report.

The report, published on Thursday by a coalition of European and African economic and political think-tanks, comes amid fears that an upcoming referendum on southern independence could trigger an escalation of violence.

Coming less than 50 days ahead of the January 9 referendum, “The Cost of Future Conflict in Sudan” report by Frontier Economics presents fresh analysis on the economic costs of war.

“Apart from $50bn to Sudan itself in lost GDP, neighbours will have to bear $25bn in lost GDP and the international community will have to spend $30bn for peacekeeping and humanitarian aid,” the report, co-launched by The Institute for Security Studies, the Society for International Development and the Aegis Trust, said.

The report said war would make the region a risky place for investment, make Sudan’s demand for imports drop and stretch neighbours’ resources when refugees pour in and they are forced to spend more money on their militaries.

“This report demonstrates the high cost of conflict. It implies that domestic, regional and international parties should be asking if they are we doing enough to avoid a war that might cost over $100bn and ruin countless lives?'” Matthew Bell of Frontier Economics said.

While the report recognises the difficulties in measuring the costs of potential future conflict, it provides different scenarios – low, medium, high conflict and peace – along with four different growth paths.

“It is widely acknowledged that a return to war in Sudan could cause immense human suffering. This report should also concentrate the minds of policymakers who are also concerned about the future economic stability of the region,” James Smith of Aegis Trust said.

The report concludes that while there may be some positive impacts on the region from investment being redirected from Sudan, the evidence suggests the net impact of conflict would be significantly negative.

“There is less than 50 days from a referendum that may change the map of Africa. This report demonstrates that the neither Sudan, Sudan’s neighbours nor the international community can afford a serious escalation in violence,” Kenneth Mpyisi of the Institute for Security Studies said.

An estimated two million people were killed in Sudan and four million displaced between 1983 and 2005 because of civil war.

The International Crisis Group, in a separate report, had expressed fears about renewed conflict if the north and south fail to reach a political accord before January’s referendum.

Observers from the Carter Centre, who have been monitoring preparations for the referendum, on their part said a war of words between northern and southern leaders is creating this climate of fear.

“Given the brinkmanship that has long characterised north-south politics, it is conceivable the parties will continue to circle fruitlessly before attempting to strike a grand bargain at the eleventh hour,” the ICG said in its report.

The Carter Centre urged the National Congress Party, which leads the Khartoum government, and the former rebel Sudan People’s Liberation Movement, that runs the south, to tone down their rhetoric in the run-up to the vote.

“In the last few days, the NCP and SPLM have traded accusations of intimidation and manipulation of the registration process in northern Sudan,” the centre said.

Despite these grim forebodings, analysts hope the potential economic impact and their economic interdependence could deter the rivals from going to war.

Most of Sudan’s oil reserves are concentrated in the south but can only be exported through a pipeline passing through the north on the way to Port Sudan on the Red Sea.

“Oil is the greatest disincentive they have. Both parties are cognitive of the fact that their economies are reliant on oil and war would prevent access to it,” Zach Vertin, an ICG analyst, said. 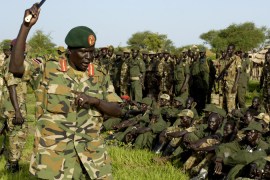 Northern army officials deny carrying out air raid on southern forces’ military base as tensions grow ahead of poll.