Millions of Taiwanese are voting in a tightly-contested local and mayoral polls widely seen as an indicator of public sentiments ahead of the presidential elections due in 2012.

The vote on Saturday comes hours after the son of a former vice-president was shot and injured in a campaign rally in a suburb of the capital, Taipei.

Ma Ying-jeou, the Taiwanese president seen as a friend fo China, who is hoping to be re-elected in two years’ time, has campaigned actively for candidates of the ruling Kuomintang (KMT) party.

The toughest races in Saturday’s polls are expected to be for the job of mayors in Taipei, and Kaohsiung, Taiwan’s second-largest city, and three other major cities.

“The elections in northern Taiwan are tight but we will do our utmost to secure our power bases,” Ma said in an interview with the official Central News Agency.

He acknowledged that some may see the local elections as a midterm evaluation of his performance.

On Friday Lien Sheng-wen, the son of Lien Chan, a veteran KMT politician, was hit in the face and temple by a bullet in an incident that most local media have so far attributed to gang violence. Lien is reported to be in stable condition.

Another man surnamed Huang was also hit when a gunman rushed the stage at an elementary school in Yung Ho, on the outskirts of the capital. Hospital officials said Huang succumbed to his wounds.

Police said a suspect has been arrested and may belong to a criminal gang.

Wang Cho-chiun, the Taiwanese National Policy Agency head, said Lien was speaking on behalf of a candidate for city council whom the police believe to be the apparent target.

Ma, the president, who rushed to hospital where Lien was being treated, said Taiwan was a democracy and “we will not tolerate such violence”.

Saturday’s elections contested by the main opposition Democratic Progressive Party (DPP) come at a time when the economy is improving rapidly and ties with China are better than ever.

The winning party in Saturday’s vote is likely to carry momentum into the presidential elections in March 2012, including having a significant impact on government policy of improving relations with China.

The KMT party’s official policy is to eventually reunify with the mainland, while the DPP wants to turn the current state of de facto self-rule into formal independence.

Ma, 60, was elected for four years in 2008 on a promise to lift the economy, and initially had a hard time as the export-dependent island was severely hit by the global financial crisis.

He favours expanding Taiwan’s already robust commercial ties with the mainland, and if re-elected, could begin political talks with Beijing.

Despite the improved ties, China has not given up its explicit wish of bringing about reunification, putting an end to 61 years of separation.

The opposition on the other hand wants to slow the pace of economic convergence across the 160-kilometre-wide Taiwan Strait and would almost certainly close the door on political dialogue with the mainland. 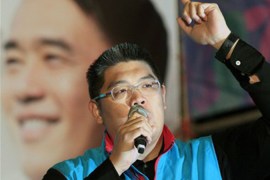 Politician’s son is critically wounded the day before Taiwanese voters head to the polls in local elections. 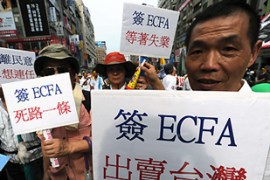 Thousands oppose deal they say will undermine the island’s self-rule and its economy. 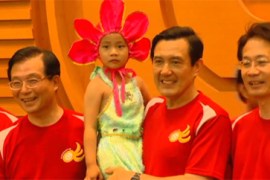