Britain’s foreign intelligence agency, often referred to as MI6, is said to have promoted an impostor who they believed was a senior Taliban commander touted as key to the Afghan peace process, according to the New York Times.

The Secret Intelligence Service (SIS) agents paid Mullah Akhtar Mohammad Mansour from May this year, believing they had achieved an “historic breakthrough” in forging contacts between the Taliban and the Afghan government, the US newspaper said on Friday.

Agents paid the man several hundred thousand dollars, convinced he had the authority to negotiate with US and Afghan officials on behalf of the Taliban, The Times and the Washington Post reported, citing Afghan officials.

“Far from being a former Taliban government minister, the individual concerned is now thought to have been a shopkeeper, a minor Taliban commander, or simply a well-connected chancer from the Pakistani border city of Quetta,” the New York Times said.

The Times said the MI6 flew “Mansour” from Quetta to Kabul on numerous occasions, believing he was second-in-command to Mullah Omar, to take part in “secret peace talks”.

Afghan officials told the newspaper that a meeting took place with Hamid Karzai, the Afghan president, in his Kabul palace, although Karzai has denied knowledge of the meeting.

The Times quoted a senior Afghan government official as saying on Thursday: “British Intelligence was naive and there was wishful thinking on our part.”

It was believed that the US had helped Britain check the man’s bona fides using signal intelligence, the Times reported.

Bill Harris, the former US representative in the southern Afghan city of Kandahar, told the Times on Thursday that it was not British intelligence officers alone who were responsible for the error.

“Something this stupid generally requires teamwork,” he was quoted as saying.

Justin Crump, an intelligence expert and former British Army officer also said the British intelligence services should not necessarily take all the blame.

“The Americans checked the individual out, the Afghans approved the meeting,” he told Al Jazeera.

“The Afghans not recognising this figure until quite late in the day is actually the most surprising part of this whole thing. This guy was checked out not only by the Afghans, but also by US intelligence assets.

“The sophistication behind this – the fact that he did have inside knowledge of the Taliban according to US sources – indicates … there’s a degree of Taliban involvement. Whether that’s just opportunism or whether that had slightly more nefarious intent, it’s hard to say.”

However, the US’ most-senior military official said on Friday that the US had long suspected that the man was an impostor.

“There were very early initial suspicions. And it took a little while to verify who he was or who he wasn’t. And, in fact, it turns out that he wasn’t the guy that he was claiming he should be,” Admiral Mike Mullen, the chairman of the Joint Chiefs of Staff, said in an interview with CNN due to air on Sunday.

He also rejected the suggestion of an intelligence breakdown, saying “the intel world actually tipped us in the right direction with respect to that”. 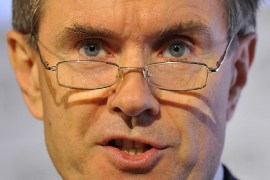 John Sawers says his agents “have nothing whatsoever to do with torture” in first ever public address by a head of MI6.