A cargo plane has crashed in a residential area in Karachi, Pakistan’s biggest city, killing all eight crew members on board, the civil aviation authority says.

The Ilyushin IL-76 aircraft had been bound for the Sudanese capital Khartoum, Pervez George, the civil aviation authority spokesman, said on Sunday.

George said that the plane went down soon after taking off from Karachi airport, crashing into a building under construction at a navy housing complex.

At least one person on the ground was injured. Abdul Razak, a local doctor, said the victim was being treated at a hospital for severe burns.

Around 20 houses were damaged or destroyed, though most were under construction and believed to be unoccupied, locals said.

The plane crashed early in the morning, when many people in the neighborhood were asleep. One of the plane’s engines was on fire as it flew overhead, witnesses said.

“I saw one of its wings was burning and there was a blast and the fire engulfed the aircraft very quickly,” Riaz Ahmed, a local resident, said.

It was the third plane accident in four months in Pakistan

On November 5, a small plane chartered to an international oil company crashed after taking off from Karachi airport, killing all 21 people on board.

A Pakistani passenger plane crashed in heavy rain near Islamabad in July, killing all 152 on board, Pakistan’s worst aviation accident. 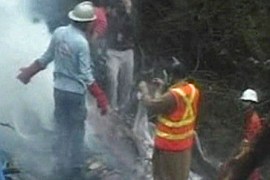 Bad weather blamed as aircraft plunges into the Margalla Hills outside Islamabad.