Police in the Brazilian city of Rio de Janeiro have intensified a crackdown on drug gangs in the city’s sprawling shantytowns, that has resulted in the death of at least 45 people and the detention of 192 others since the operation began last week.

Amid intermittent gunfire, security forces on Saturday were preparing to enter Alemao, another major shantytown or “favela” in the city’s north, a day after troops entered Vila Cruzeiro, a neighbouring slum.

Soldiers in camouflage, black-clad police from elite units and regular police held their ground at the entrances to Alemao, a grouping of a dozen slums that climb up small slopes where more than 85,000 people live, according to the Brazilian government.

Al Jazeera’s Gabriel Elizondo, reporting from Rio de Janeiro, said that it will not be possible to bring tanks into the Alemao favela.

“This complex sits on hills, so the security forces will have to go in and engage in hand-to-hand combat,” he said.

Police have now given suspected drug traffickers in Alemao slum an ultimatum to turn themselves in, as more than 1,000 police and army personnel surround the area.

“There is not the slightest chance traffickers can win in this war in Alemao,” Sergio Duarte, the head of the military police told reporters.

“We are in position to invade Alemao at any moment. It’s better they give themselves in now and bring their weapons while there’s still time, because when we invade, it’s going to be more difficult,” he said.

Duarte did not give a date or time for the offensive.

The suspected traffickers are said to have fled to Alemao from the Vila Cruzeiro slum.

The standoff comes after a week of intense and widespread violence in the city, during which dozens of motorists were robbed and more than 100 cars and buses were set ablaze.

Authorities say the gangs are protesting against a two-year-old police campaign that has pushed the criminals out of slums where they have long ruled with impunity.

“The police can enter Vila Cruzeiro and kill another hundred, but that won’t solve the problem in Rio de Janeiro,” he told the AFP news agency.

In October 2009, drug gangs shot down a police helicopter near the Maracana stadium – one of the main sites of the upcoming World Cup – killing three officers. 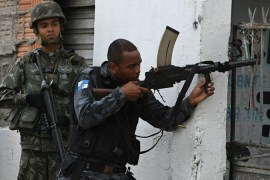 At least 44 people killed in six days of gun battles between security forces and gangs in shantytowns of Rio de Janeiro. 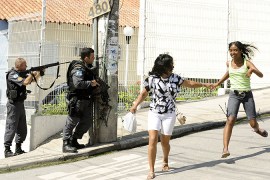 Dozens killed as security forces claim victory over drug gangs for control of the biggest shantytown in Rio de Janiero. 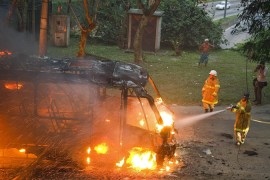 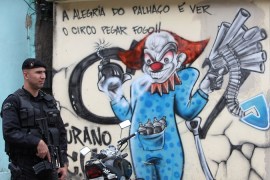