A Tongan pro-democracy leader has emerged with the biggest bloc of lawmakers after the Pacific nation’s historic first vote for a popularly elected parliament.

Akilisi Pohiva, a veteran pro-democracy campaigner, and the leader of the Friendly Islands Human Rights and Democracy party won 12 of the 17 publicly contested seats in Thursday’s vote, preliminary results showed.

About 42,000 registered voters had cast their ballots to elect 17 of the 26 members of parliament, in an election hailed as marking the country’s transition from monarchy to democracy.

However the poll did not reflect full democracy, as the remaining nine seats are reserved for the kingdom’s nobility – or aristocratic landowners.

Still, King George Tupou V described the vote as “the greatest and most historic day for our kingdom” in an address to the nation before polling stations opened on Thursday.

“You will choose your representative to the parliament and thus the first elected government in our country’s long history,” he said.

Officials said voting was “steady” with a “happy mood” around the polling stations.

More than 140 candidates were competing for the seats in the legislature.

When the make up of the new parliament is complete, the newly elected representatives will elect a prime minister.

Previously the parliament was dominated by politicians selected by the monarch, who also picked the prime minister and cabinet.

A delegation of 14 observers from Australia and New Zealand were in Tonga to observe the election.

The election comes after Tonga suffered major political unrest in 2006 when rioters demanding democratic change torched the centre of the capital, Nuku’alofa, burning down buildings and killing eight people.

The declining economy was seen as the most pressing issue for Tongan voters. The World Bank estimates up to 40 per cent of Tonga’s 123,000 people live on or below the poverty line.

“People are saying we’re very concerned about what we feed ourselves with, our future, how much we get paid, whether we can have the ability to put our kids to school,” Kalafi Moala, a voter, said.

“The economy is definitely the priority.” 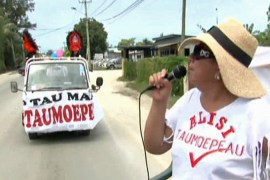 For the first time, the majority of the country’s MPs will be elected by the people rather than appointed by the king.