The United States says it believes North Korea’s artillery attack on an island close to its disputed maritime border with South Korea was an isolated incident.

“This was, in our view, a one-off, premeditated act,” PJ Crowley, the US state department spokesman, said on Wednesday.

“Without getting into intelligence matters, we don’t see that North Korea is … preparing for an extended military confrontation.”

However, Crowley still called on China to act to restrain Pyongyang from any repeat of the assault on the tiny island of Yeonpyeong in the Yellow Sea that left two South Korean marines and two civilians dead.

“China is pivotal in moving North Korea in a fundamentally different direction,” he said. “We expect China to be clear like we are.”

Meanwhile, South Korean president Lee Myung-bak called an emergency meeting on Thursday to contain the economic impact of the strike.

Local media said the meeting of senior security and economic officials in Seoul would discuss ways to prevent tensions with the North from damaging the South’s economy.

Washington has thrown its support behind Seoul since the incident with Barack Obama, the US president, calling his South Korean counterpart to reassure him that – with 28,000 troops based on the peninsula – the US “stands shoulder to shoulder” with its ally.

The USS George Washington aircraft carrier, which carries 75 warplanes and has a crew of over 6,000, is also heading to the region to join military exercises with Seoul.

Beijing, North Korea’s closest ally, has urged the two sides to avoid any further violence and expressed regret at the deaths.

“China pays close attention to the incident. We regret the casualties and property losses, and are concerned about the situation,” Hong Lei, the foreign ministry spokesman, said in a statement reported by the official Xinhua news agency.

“We strongly urge both sides to retain calm and restraint, and engage in talks as quickly as possible in order to prevent similar incidents from happening again.”

“That behaviour isn’t going to change. The Americans are going to have a very hard time trying to convince the Chinese to do any more.|

Seoul has denied that it was firing shells in the direction of North Korea, which lies just 11km from the island which came under attack. North Korea’s artillery barrage prompted an exchange of fire that lasted about one hour.

Admiral Mike Mullen, the US military’s most senior officer, said on Wednesday that it was believed that the attack was connected to the apparent positioning of the youngest son of Kim Jong-il, the North Korean leader, as his successor.

“This is … tied we think to the succession of this young 27-year-old who’s going to take over at some point in the future,” the chairman of the joint chiefs of staff said in an interview on ABC’s “The View”.

The bodies of two civilians were pulled from a heavily damaged construction site on Yeonpyeong on Wednesday as burned-out buildings continued to smolder. Footage aired by YTN television showed smashed windows and the huge shell craters.

Evacuees from the island also continued to arrive in Incheon with tales of panic as shells landed around them.

“I heard the sound of artillery, and I felt that something was flying over my head,” Lim Jung-eun,who fled Yeonpyeong with three children, including a nine-month-old strapped to her back, said. “Then the mountain caught on fire.” 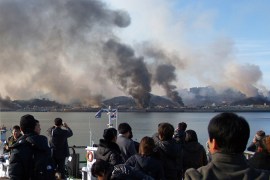