Cambodia’s prime minister has led an emotional memorial ceremony at the bridge where 347 people were killed in a stampede on Monday.

Hun Sen, dressed in black, wiped away a tear and burnt incense at a small altar erected at the foot of the narrow bridge in Phnom Penh, the capital, on Thursday.

Flags were flying at half-mast at government buildings across the capital, while most schools were closed and dozens of uniformed school children carrying flowers attended the early morning ceremony.

Officials said crowds celebrating the nation’s annual water festival apparently panicked as rumours rippled through the crowds that the bridge to an island in the Bassac river was about to give way.

“The deaths happened because the bridge was overcrowded and there was panic that the bridge was collapsing because it is hung by cables and it was swaying,” Prum Sokha, secretary of state at the
interior ministry, said.

“Some started screaming that the bridge was collapsing, that people were getting electric shocks and that the iron cables were snapping, so the people pushed each other and fell down and the stampede happened.”

Al Jazeera’s Harry Fawcett, reporting from Phnom Penh, said the ceremony began at 6am [local time] and that “there’s been a steady stream of mourners”.

“Many of them dressed in traditional mourning colours of black and white, bringing lotus flowers, incense sticks and saying prayers at a makeshift altar in front of the bridge,” he said.

“One husband and wife have come because their son is still missing. They haven’t been able to find his body or him [if he has survived] at any of the hospitals.”

An estimated 7,000-8,000 people were streaming over the bridge that connects the island to the mainland when it began to sway, according to Banyon TV, which cited the investigation committee looking into the disaster.

Though typical, the movement of the bridge terrified the festival goers, many of whom were in Phnom Penh from the provinces for the end of the rainy season and were unfamiliar with such bridges, Touch Naroth, the city police chief, said.

The government admitted it had overlooked issues of crowd control, while the victims’ families expressed growing anger about security at the event, which attracted at least two million revellers from all over Cambodia.

“We were concerned about the possibilities of boats capsizing and pick-pocketing. We did well, but we did not think about this kind of incident,” Khieu Kanharith, a government spokesman, told the AFP news agency.

He said a private firm had been in charge of security on the island and the bridge where the disaster unfolded.

“The place is private, so they used their own security, and police only helped handle order outside,” Kanharith said.

The prime minister said a memorial stupa would be built “to commemorate the souls of the people who lost their lives in the incident … and to remember the serious tragedy for the nation and the Cambodian people”. 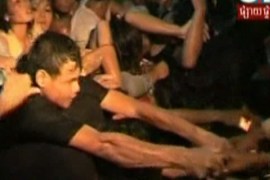 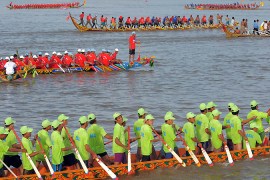 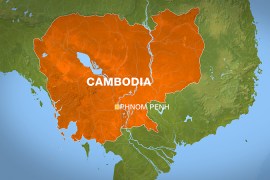 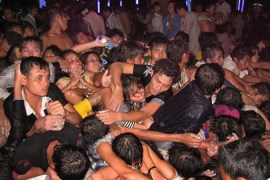