Haiti’s deadly cholera epidemic is spreading faster than originally estimated and could result in hundreds of thousands of cases, a senior UN official has said.

The disease has killed about 1,400 people since it first appeared in mid-October.

But Nigel Fisher, the UN humanitarian co-ordinator in Haiti, said on Tuesday that the real death toll might be “closer to two thousand than one” because of lack of data from remote areas, and the number of cases 60,000-70,000 instead of the official figure of about 50,000.

Fisher said experts from the World Health Organisation (WHO) were now revising their estimate that the disease would cause 200,000 cases within six months.

“They are now revising that to 200,000 in closer to a three-month period. So this epidemic is moving faster,” he said, adding that it was now present in all 10 of Haiti’s provinces. “It’s going to spread.”

“The medical specialists all say that this cholera epidemic will continue through months and maybe a year at least, that we will see literally hundreds of thousands of cases,” Fisher said.

Fisher said UN and other aid organisations needed to “significantly ratchet up” their response, including going through faith groups to distribute chlorine tablets to purify water, and increasing the number of treatment centres.

The WHO has said it is expecting to treat 400,000 cholera cases in the country over the next 12 months.

Al Jazeera’s Cath Turner, reporting from the capital, Port-au-Prince, said that the new estimates were done after the organisation collected data from areas that were previously unaccessible.

“The WHO says that number is the worst-case scenario, that’s if nothing changes, if the environment, the conditions and the lack of awareness doesn’t change.”

The anti-cholera campaign has been complicated by unconfirmed reports that UN peacekeepers from Nepal brought the disease to Haiti, where it had been absent for 100 years.

At least two people were killed and dozens were injured in clashes last week between UN troops and protesters. The UN has blamed the trouble on political agitators looking to inflame tensions ahead of elections next Sunday.

Fear has grown that the disease could spread more quickly in an election environment when people have to move around and congregate to campaign.

Some human rights groups have called for a delay of the vote in light of the cholera outbreak.

“Cholera is a game changer in the most fundamental sense,” Melinda Miles, the executive director of the group “Let Haiti Live,” said.

“What we can say, definitively, is that… no elections held in the midst of the current exploding cholera crisis can be considered credible.”

But Kenneth Merten, the US ambassador to Haiti, urged no delay with the polls, saying on Tuesday that issues surrounding the disease and the election can be avoided “as long as people are informed… of how they can protect themselves from cholera and what treatment to seek.” 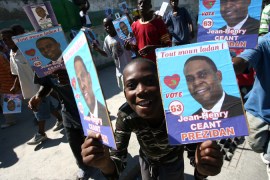 Unrest ‘must not stop Haiti polls’ 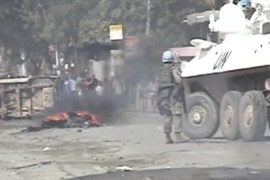 Liberation day marred by violence as UN troops fire tear gas on people blaming them for the outbreak. 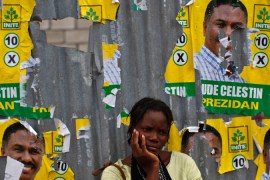 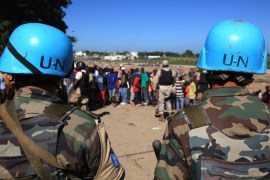