Five Somali men accused of attacking a US navy ship off Africa’s coast have been convicted on federal piracy charges, in what experts said was the first trial of its kind in more than a century.

The five men stood silently as the verdict was read on Monday in a US district court in Norfolk, Virginia. They face mandatory life terms at a sentencing hearing set for March 14.

Prosecutors argued during trial that the five had confessed to attacking the USS Nicholas on April 1 after mistaking it for a merchant ship.

The Nicholas, based in Norfolk, was part of an international flotilla fighting piracy in the seas off Somalia.

Defence lawyers had argued the men were innocent fishermen who had been abducted by pirates and forced to fire their weapons at the ship.

John S Davis, an assistant US attorney, had argued that three of the men were in a skiff that opened fire on the Nicholas with assault rifles, then fled when sailors returned fire with machine guns.

Davis said all the men later confessed to the attack in remarks to an interpreter on board the ship. He said they expected to make anywhere from $10,000 to $40,000 from the ransom, a comparatively small sum.

Defence attorneys said it is not uncommon in virtually lawless Somalia for pirates to capture fishermen and essentially enslave them, forcing them to either do their bidding or be killed. They said that is what happened to their clients.

Other countries, such as Germany, have recently held piracy trials, but legal and maritime scholars say one of the last in the US was in 1861 when 13 Southern privateers aboard the schooner Savannah were prosecuted in New York City.

The jury deadlocked and the men were later exchanged with the South. 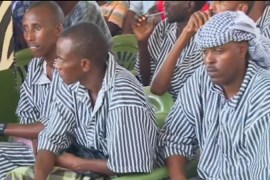 Kenyan authorities’ move to release pirates raises questions of who can, and will, prosecute piracy crimes.