At least one soldier has been killed and two others injured in a roadside bomb blast in southern Yemen, officials have said.

They were riding in a military vehicle in the city of Lawdar, located in the volatile southern province of Abyan.

The attack on Tuesday happened a day after the country kicked off a regional football tournament in the south.

After the explosion, Yemeni soldiers clashed with armed men near the site.

A local official told Reuters news agency that it was not yet clear who was behind the attack. However, Abyan is an area where several military raids against suspected al-Qaeda fighters have occurred.

Zinjibar, Abyan’s capital, is hosting the 20th Gulf Cup along with the neighbouring coastal province of Aden.

The government has put in place heavy security across the area, deploying 30,000 troops in an attempt to maintain calm in the south, which in recent months has seen clashes as the state struggles to subdue a rising southern separatist movement.

It has also witnessed growing violence by al-Qaeda, which has found safe haven in the south and east of Yemen, Osama bin Laden’s ancestral homeland.

Al-Qaeda in the Arabian Peninsula (AQAP), the armed group’s Yemen-based wing, has vowed to “bleed” US resources with inexpensive, small-scale attacks that cost billions for the West to guard against.

The Yemeni government has said it had spent around $1bn on the football event.

Ali Abdullah Saleh, the president, visited the port city of Aden last week, where he inspected the facilities for the tournament and held meetings with organisers and security officials.

Saleh paid tribute to “the efforts of the security services and military to ensure that the tournament takes place peacefully and securely”. 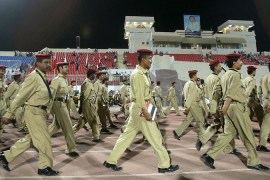 Some 30,000 troops deploy to protect Gulf Cup football tournament after threats from al-Qaeda and other armed groups. 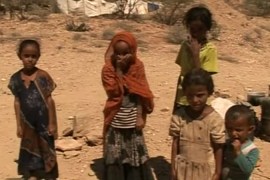 Civilians caught up in Yemen war 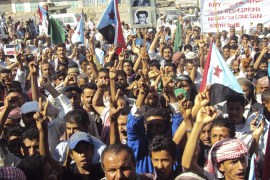 Thousands march through cities in country’s south after Hassan Bamoum, leader of secessionist movement, is detained.