The Japanese justice minister has resigned over comments that made light of his duty to respond to questioning in parliament, the latest blow to the ruling party as it struggles to keep Japan’s fragile economic recovery alive.

Minoru Yanagida held a press conference on Monday morning in Tokyo to announce his resignation.

Yanagida said on November 14 that as justice minister he only needed to remember two comments when facing questions from legislators: “I do not comment on specific cases”, and “We are dealing with the matter appropriately based on law and evidence”.

The remarks set off a firestorm of criticism from legislators, who demanded he step down from his post.

He initially said he would stay on, but decided to resign after meeting with Prime Minister Naoto Kan early on Monday, according to reports by public broadcaster NHK and the Kyodo news agency.

A key opposition party had been preparing a censure motion against him and threatening to boycott parliamentary deliberations on the stimulus budget if he didn’t quit.

The gaffe is the latest setback for Prime Minister Naoto Kan, whose falling support in polls has emboldened the political opposition.

Kan has been weakened by public anger over recent diplomatic spats with China and Russia, and political sparring has delayed progress on a major financial stimulus package, even as deflation and a strong yen threaten the struggling economy.

Kan has lost support among voters, many of whom feel Tokyo responded too timidly in recent diplomatic spats with China and Russia.

Parliamentary debate over a crucial $61bn stimulus package has been held up over his handling of leaked video footage of a collision between a Chinese fishing boat and Japanese patrol vessels near disputed islands.

Japan’s economy expanded at an annualised pace of 3.9 per cent in the third quarter, but all signs point to a rapid deceleration in the current quarter.

Slowing exports and a persistently strong yen are taking their toll, while deflation is keeping a tight grip on the world’s third largest economy.

The package, which the government estimates will help lift the nation’s gross domestic product by 0.6 percentage points, includes financial support for small businesses and spending to boost local economies.

In June, political squabbling led another minister to step down.

Shizuka Kamei, the former financial services and postal reform minister who heads a small coalition party, resigned while saying the ruling party had breached an agreement to quickly pass a bill aimed at scaling back the privatisation of Japan’s postal system. 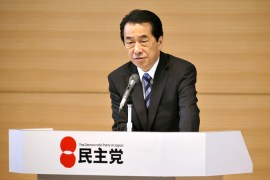 Naoto Kan aims to strengthen his hand after a challenge to his leadership of the ruling DPJ. 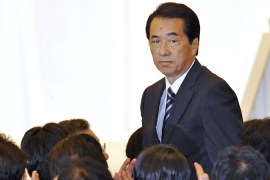