At least 160 asylum seekers are protesting against delays in processing their applications for refugee status at Australia’s controversial offshore immigration detention centre on Christmas Island.

Ten of them have sewn their lips together and are refusing medical attention but are drinking water and sugar.

Australia’s immigration minister, however, has said the protest will not change the outcome of their applications.

“This is distressing for me and most of the Australian people,” Chris Bowen said in Sydney on Friday.

“Any protest which is designed to change the result of refugee applications will not work,” Bowen said. “In Australia, if you are a genuine refugee you’ll be accepted. If your application is not recognised as
being genuine, you’ll be rejected.”

Christmas Island is an Australian territory in the Indian Ocean, off the country’s western coast. The detention centre there lacks the support available to those detained on the mainland, Alex Bainbridge, a member of the Refugee Rights Action Network in Perth, West Australia, told Al Jazeera.

“It’s understandable that people would take desperate action because they’re in a desperate situation,” Bainbridge said.

He said that while the Labour Party ended the so-called Pacific Solution policy – initiated under John Howard’s conservative government – when it came to power in 2007, it has continued to enforce mandatory detention for asylum seekers.

“Whenever the policy of mandatory detention remains in place, there will always be injustices,” he argued.

The Refugee Rights Action Network is campaigning for an end to mandatory detention, and in particular for the Christmas Island detention centre to be shut down.

While Christmas Island is technically part of Australian territory, the government has tried to “to deny [detainees there] the protection of the Australian legal system,” Bainbridge said.

The Christmas Island protest comes a week after a high court decision struck a blow to the offshore processing system. The ruling found that the current process discriminates between asylum seekers who arrive by boat and are classified as “irregular arrivals” – as is the case with those sent to Christmas Island.

Some asylum seekers have spent more than a year in Australian detention centres while they await the processing of their requests.

The Christmas Island protest follows the apparent suicide last week of an Iraqi asylum seeker at a detention centre in Sydney and a subsequent protest there.

Australia has long been a destination for people from poor, often war-ravaged countries hoping to start a new life. Most asylum seekers in recent years have come from Afghanistan, Iran and Iraq.

This year, more than 110 boats carrying asylum seekers have entered Australian waters. Their occupants have been detained at either Christmas Island or mainland detention centres while their refugee claims are assessed. 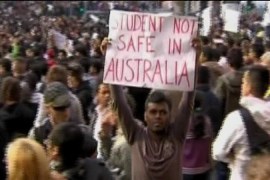 India outraged by derogatory email circulated by police about Indian students in Victoria. 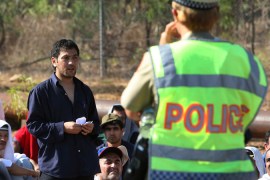 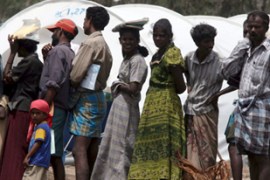