Japan has temporarily recalled its ambassador to Moscow, Russia’s capital, in a move that threatens to deepen a diplomatic row between the two countries over a chain of disputed Pacific islands.

Relations between the nations soured after Dmitry Medvedev, Russia’s president, visited the Kuril Islands, which were seized by Soviet troops at the end of the Second World War, on Monday.

Seiji Maehara, Japan’s foreign minister, said Tuesday’s decision to call back its ambassador was not intended to be antagonistic, but added that Tokyo wished to “make our position clear”.

The dispute over the islands has coloured relations between Tokyo and Moscow since the end of the war, preventing the signing of a formal peace treaty.

“We have a territorial problem and that needs to be solved,” Maehara said.

“But our basic policy of concluding a peace treaty with Russia and strengthening economic relations once that problem is settled remains unchanged.”

Naoto Kan, Japan’s prime minister, who is currently struggling with a divided parliament and fragile economy, has come under fire for what critics claim was his mishandling of a separate territorial dispute with China, and is under pressure to look firm on this occasion.

Despite its decision to recall its envoy, Japan said on Tuesday that it believed a scheduled meeting between Medvedev and Kan would still take place next week.

The meeting between the two nations’ leaders is due to take place on the sidelines of the regional Asia-Pacific Economic Co-operation (Apec) summit in the Japanese city of Yokohama.

Sergei Lavrov, Russia’s foreign minister, said Moscow was not planning to recall its ambassador to Tokyo and said that Japan was over-reacting to Medvedev’s visit.

He also said that Medvedev plans to visit other islands disputed with Japan and step up investments in the archipelago.

“The president said he will visit the other islands … in this small group,” Lavrov said.

“We have already made clear that protests and such strong reactions are unacceptable for us and we will continue to have such views.”

The four islands at the heart of the diplomatic row are known as the Northern Territories in Japan and southern Kurils in Russia.

They stretch from northeast of Japan’s main northern island of Hokkaido to Russia’s Kamchatka Peninsula.

The islands are located in fish-rich waters, close to oil and gas reserves. 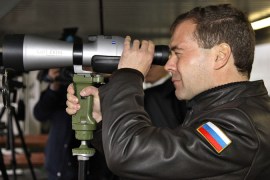 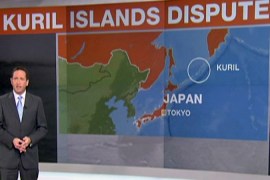 A close look at the origins of the conflicting territorial claims of Japan and Russia.