The US administration has said it will continue to try some Guantanamo Bay detainees in civilian courts, despite criticism following the acquittal of a Tanzanian on more than 280 charges related to the 1998 embassy bombings in Africa.

A jury at a federal court in New York convicted Ahmed Ghailani on just one charge of conspiracy to damage or destroy US property by means of an explosive device.

“There was a guilty verdict, a minimum sentence of 20 years that incapacitates somebody that has committed a terrorist act and, because of that incapacitation, isn’t going to threaten American lives,” Robert Gibbs, the White House press secretary, said on Thursday.

He said that the US would continue to use “all the tools at our disposal” to prosecute inmates at the US prison at Guantanamo Bay.

Ghailani still faces a minimum sentence of 20 years over the attacks in Kenya and Tanzania, but critics used his acquittal on 276 counts of murder and attempted murder to push for detainees to be tried by military tribunals.

“The president and the attorney general said they wanted to have the trial in civilian court to have the world see what would happen,” Peter King, a Republican congressman, told Fox News.

“The world can see Ghailani was cleared of 280 counts, including 200 counts of murder.”

The Obama administration is believed to be seeking to try about 40 of the 171 detainees at the US prison in Guantanamo Bay in civilian courts, as part of its stalled plans to empty and close the facility.

Mitch McConnell, the Republican party leader in the senate, said that Americans were now “wondering when the administration will admit it was wrong and assure us … that terrorists will be tried from now on in the military commission system that was established for this very purpose at the secure facility at Guantanamo Bay”.

Colonel Jeffrey Colwell, the chief defence counsel to the office of military commissions for the US defence department, told Al Jazeera, however, that he was “disturbed” that people appeared to be criticising the federal court for not delivering the verdict they wanted.

“Its disturbing if there’s a system designed to assure convictions. That’s a problem.

“I applaud the jury up in New York. That was a courageous jury that made a terribly difficult and courageous decision to set aside their prejudice and their fear and their bias and actually make an informed decision.”

Matthew Miller, a spokesman for the US justice department, also praised the New York jury for “another in a long line of verdicts where federal civilian courts have shown the ability to deliver fair trials and long sentences”.

He told reporters that the administration would continue to rely on a combination of civilian courts and military commissions.

“We make those decisions based on facts, based on the law,” he said.

“And we’ll continue to work through that with the detainees who are still at Guantanamo.”

Eric Holder, the attorney general, had planned to try Khalid Sheikh Mohammed, who has reportedly claimed to have masterminded the September 11 attacks on the US, and four others in New York. However, that has been put on hold because of opposition in congress and in New York. 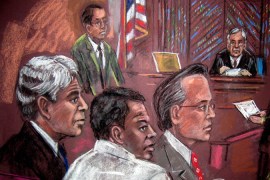 US jury hands down Ghailani verdict

Ex-Guantanamo inmate accused of role in US embassy attacks acquitted on all but one of 286 charges at civilian trial. 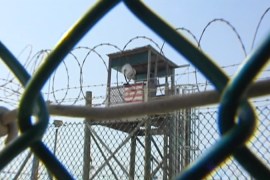 Ghailani guilty on one count

Jury decides former Guantanamo jail inmate did not know of plot to bomb US embassies in Africa in 1998. 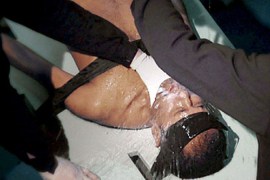 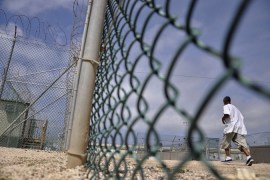