The United Nations has resumed mediation talks between the Greek and Turkish Cypriot leaders over how to reunite their divided islands.

Demetris Christofias, head of the internationally recognised Greek Cypriot government, and Dervis Eroglu, his Turkish-Cypriot counterpart, agreed on Thursday to step up contact to try to overcome obstacles in the quest to reunite their island, Ban Ki-moon, the UN secretary-general, said.

Ban said the two men would aim to work out a “practical plan” for resolving outstanding problems.

Ban said he planned to meet Christofias and Eroglu again in Geneva at the end of January to seek progress in ending a conflict that is harming Turkey’s bid to join the European Union.

“In the meantime, the leaders will identify further convergences and the core issues which still need to be resolved across all chapters,” he said.

Cyprus has been divided for over three decades, with the northern third – inhabited by Turkish Cypriots – belonging to the self-declared Turkish Republic of Northern Cyprus, which is recognised only by Ankara.

The southern two-thirds are inhabited by Greek Cypriots. They represent the whole island in the EU and say Turkey cannot join the bloc until the conflict is resolved.

A “Green Line” dividing the two parts is patrolled by UN troops.

In principle, both sides desire to reunite Cyprus as a federation. But the latest series of UN-mediated talks, which started two years ago, are stalled over whether thousands of displaced Cypriots should have the right to regain their properties or be compensated.

The two sides also cannot agree on power-sharing and how much territory each side will retain.

Ban said he had called the two leaders to New York because the dialogue, mediated for the UN by Alexander Downer, the former Australian foreign minister, was “losing momentum” after appearing headed for success earlier in the year.

“The people of Cyprus and the international community want a solution, not endless talks.”

The split of the east Mediterranean island followed a Turkish invasion in 1974, triggered by a brief Greek-inspired coup in Nicosia, the capital. Some 30,000 Turkish troops remain in the north. 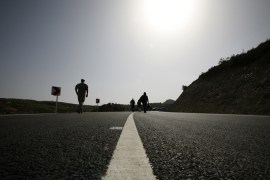 If Greek and Turkish Cypriot leaders cannot agree on reunification, is a two-state island the only solution?

The European Union has offered Turkey 3 October 2005 as the date to begin negotiations on its membership of the bloc.

The European Union is still struggling to end an embarrassing impasse over Turkey’s refusal to recognise member state Cyprus, just two weeks before accession talks are due to start.