Myanmar’s pro-democracy campaigner Aung San Suu Kyi says she has no regrets over her party’s decision to boycott the general election held on November 7.

In an interview to Al Jazeera, the 65-year-old Nobel Prize laureate said the decision to withdraw her National League for Democracy (NLD) was the right one, even though some of her supporters believed it was a mistake.

Suu Kyi said that the people of Myanmar have to stand up for themselves if they want to see change in their country.

“The people have to want it, and they have to be united,” she said.

In the interview, Suu Kyi was careful not to verbally challenge the current military leadership of Myanmar. However, she was defiant over her seven-year period of house arrest, which she termed “illegal”.

She also said the military leadership of Myanmar was not softening its stance.

Al Jazeera’s special correspondent, reporting from Yangon, Myanmar’s main city, said Suu Kyi’s release encouraged her further to fight for democracy, “because her following has grown significantly during her detention”.

“A lot of those supporters are younger then when she campaigned for democracy in the past,” our correspondent said.

“She believes her party is getting through to the younger generation and she is getting more confident that this is the key to change here [in Myanmar].”

International monitors of the elections and some of her local following had criticised Suu Kyi’s decision to boycott the national vote because it left people with little choice.

“Boycotting the elections was the only decision to make because they [the NLD] didn’t believe in the election rules,” our correspondent said.

“Standing up for democracy can be a very dangerous occupation in Myanmar, but she [Suu Kyi] believes the more people do that, the more perhaps the current rulers of this country will start to take notice, and will start to change.”

Counting for the November 7 vote has reportedly been finalised, with the main military-backed party scoring a comprehensive victory.

Myanmar’s election commission announced on Thursday that the Union Solidarity and Development Party (USDP) of Thein Sein, the current prime minister, won three-quarters of the seats in the national and regional assemblies that were up for grabs. 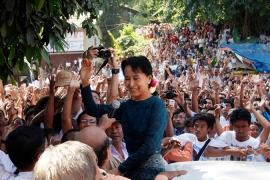 What now for Aung San Suu Kyi and her fight for democracy? 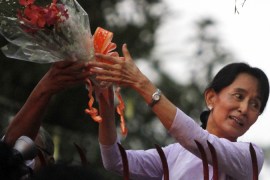 The background story of a woman who has come to symbolise non-violent resistance against oppression in Myanmar. 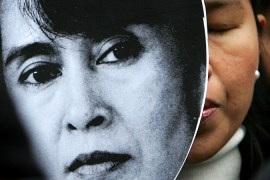