A former Soviet airforce officer accused of trafficking arms, has pleaded not guilty to terrorism charges in a US court.

Viktor Bout, nicknamed The Merchant of Death, insisted on Wednesday that he was a legitimate businessman but prosecutors argued the Russian is guilty of conspiring to kill US nationals.

Bout was arrested in Thailand in March 2008, and has been in custody there until now. The US and Russia have been in a bitter disagreement during this time, each wanting control of him.

Tensions remain high between the two countries, threatening cooperation on arms control, nuclear weapons restrictions and the war in Afghanistan.

He was extradited on Tuesday to the US.

The Russian foreign ministry said the extradition was “unlawful”. In an interview broadcast on Russian television, Sergei Lavrov, Russia’s foreign minister, said the Thai government’s decision was ”an example of glaring injustice”.

During his eight-minute trial on Wednesday, the court heard that Bout had attempted to sell arms to Farc, the Colombian rebel group classified by Washington as a narco-terrorist group.

He also has been accused of supplying weapons that fuelled civil wars in South America, Africa and the Middle East.

His clients range from Liberia’s Charles Taylor to Muammar Gaddafi, the Libyan leader, to the Taliban government that once controlled Afghanistan.

He is reported to have an arsenal of 700 surface-to-air missiles at his disposal, along with 5,000 AK-47 assault rifles, millions of rounds of ammunition, ultralight aircraft equiped with grenade launchers with a range of more than 200km.

The indictment labels him as an international weapons trafficker, who from the 1990s up until his arrest in 2008, supplied fighters in Third World countries with weapons and military equipment.

Estimated to be worth in excess of $6bn, he faces 25 years in prison if convicted. Bout is being held wihtout bail.

The trial continues on January 10. 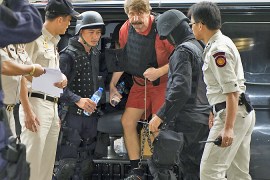 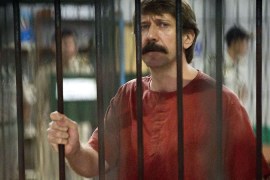 Charges against alleged Russian arms smuggler dropped, clearing legal hurdle to his extradition to the US. 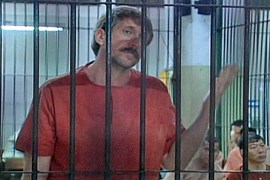