New security screening procedures at many American airports mean travelers have to choose between x-rays by a full body scanner or a “vigorous pat-down” including physical prodding of breasts and groins, civil liberties groups have said.

Full body scanning machines- dubbed “virtual strip searches” by critics- have existed at some airports since the beginning of 2010, but they have become more widespread in recent months.

The pat-downs or “gropes” have been happening across the US in the past couple of weeks, said Christopher Calabrese, a member of the American Civil Liberties Union (ACLU) legislative council in Washington.

“People are faced with two intolerable choices: let someone take naked images of you or let someone grope your body,” Calabrese told Al Jazeera. “The searches have become more aggressive.”

“It is clearly the policy that women’s breasts will be patted down. If a woman is wearing a skirt at the airport, the pat-down is going to go up inside the skirt.”

The Transportation Security Administration (TSA), the US government body responsible for airport security, did not return calls from Al Jazeera requesting comment.

Calabrese and other civil libertarians say the full body scans are just as invasive as the pat-downs. “It is really a virtual strip search, it is creating a naked picture of your body and the anatomical images are clear.”

John Tyner, a 31-year-old software programmer filmed his pat-down on a cell-phone camera, in a video which has gone viral. “If you touch my junk, I’m going to have you arrested,” he told a TSA official, before being escorted out of the airport.

A poll by CBS reports that roughly 81 per cent of Americans support the use of full body scanning in airports while 15 per cent of respondents said they oppose the technology, with four per cent still undecided.

Naked images obtained by the body scans are viewed by a TSA screener in another room. The organisation has said the images are deleted after the person passes through security, but there have been lapses in data management and privacy.

Gizmodo, a website specialising in the technology industry, reports that US Marshals operating a similar body scanner in a Florida court house saved 35,000 images in their scanner. Gizmodo obtained 100 of the photographs of people’s body scans – which were not supposed to have been saved in the first place- through a Freedom of Information (FOIA) request.

Sikh travelers who wear the turban say they are outraged by the new measures, as they have been forced to remove the religiously required garment.

Critics also allege that the scanners emit dangerous levels of radiation, which could lead to skin cancer and other ailments.

And civil libertarians are not convinced that the body scans will make airports safer from attacks.

“The full body scanners do not pick up what is inside body cavities,” John Whitehead, a human rights activist with the Rutherford Institute in Virginia, told Al Jazeera. “If you are a real terrorist, you are going to put it [dangerous material] up your cavity. Israeli airports do not use scanners; they think it [scanning] is a joke.”

In January 2010, the London Independent newspaper reported on “authoritative claims that the [UK] Department of Transport and the Home Office have already tested the scanners and were not persuaded that they work comprehensively against terrorist threats to aviation”.

The idea of full body scanners or pat-downs became popular in some security circles after Umar Farouk Abdulmutallab allegedly carried a bomb in his underwear in an attempt to blow up an international flight near Detroit in December 2009.

It is not clear if body scanning would have discovered the alleged underwear bomb, according to a report from the non-partisan Government Accountability Office (GAO) in the US.

“After the attempted underwear bombing Michael Chertoff [the former Homeland Security Secretary] went on television pushing the fact that we need these scanners,” Whitehead said. “He was a lobbyist for Rapiscan Systems [a company which produces the scanners].”

The lobbyist’s consulting firm, the Chertoff Group, promises “business development solutions for commercial and government clients on a broad array of homeland and national security issues”.

There are around 300 full-body scanners now operational in 60 US airports. The TSA plans to deploy approximately 500 units by the end of 2010. Each machine costs around $150,000.

“The Obama administration provided about $1bn in stimulus money to buy these scanners,” Whitehead told Al Jazeera. “Someone is making a lot of money.” 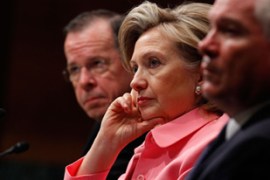 Document downplays fears the US is “at war” with Islam. 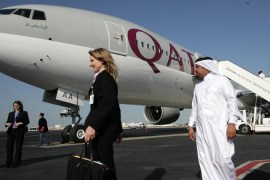 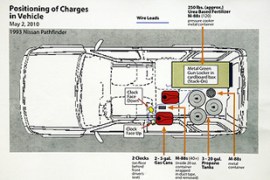