Haitians have blamed UN peacekeepers for a number of shootings in the country’s second city of Cap-Haitien on the third consecutive day of violent demonstrations over an outbreak of cholera that has killed more than 1,000 people.

Doctors said on Wednesday that at least five people had been admitted to hospital with gunshot wounds.

Al Jazeera’s Cath Turner, reporting from Cap-Haitien, said that protests had started at a cemetery where cholera victims were being placed in mass graves.

“Clashes had then begun and according to doctors in the city’s main hospital, the patients brought in were shot by live fire. They confirmed to us that they were shot by real, not rubber bullets,” she said.

“According to some residents, there has also been a body laid out in front of the UN office in Cap-Haitien, said to be of someone who was shot dead by UN peacekeepers.”

However, a spokesman for Minustah, the UN mission in Haiti, told Al Jazeera there was no exchange of gun fire between UN troops and local residents.

The spokesman added that local gang rivalry could be to blame for the gunshot wounds.

The reported shootings come after the deaths of at least two people during clashes between residents and UN troops on Tuesday.

Crowds have taken to the streets expressing anger at the Haitian government and the UN for failing to contain the outbreak of cholera.

Some Haitians blame Nepalese peacekeepers for the disease, which is rapidly claiming more lives, and according to medical experts, could kill 10,000 people and cause 200,000 infections in the coming year.

“Our projections show that we could have around 200,000 cases of infection in Haiti over the next six to twelve months,” Ciro Ugarte, a regional adviser for the Pan-American Helath Organisation (PAHO), told the AFP news agency.

Ugarte also said that the cholera epidemic could spread “beyond Haiti”, followng reports of the first reported case in neighbouring Dominican republic, as well as in the US state of Florida.

More than 1,100 Haitians have died since cholera was first detected in the nation in mid-October and the number of people treated in hospitals and clinics has soared to 18,382.

The PAHO, a regional office of the UN’s World Health Organisation, has warned that cholera has taken hold and the troubled Caribbean nation should now expect hundreds of thousands of cases over the next few years.

Health officials fear the cholera epidemic could spread rapidly if it infiltrates Haiti’s squalid refugee camps around the capital Port-au-Prince, where hundreds of thousands of earthquake refugees live in
cramped and unsanitary conditions.

The cholera outbreak – the first in more than half a century in the impoverished Caribbean nation – is bringing new chaos to Haiti after it was ravaged in a January earthquake that killed 250,000 people. 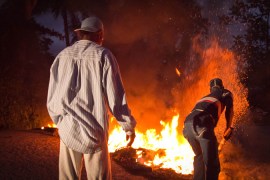