Chinese police are holding four suspects after a Shanghai apartment fire that killed 53 people and injured 70 others was blamed on unlicensed welding, state media said.

The fire, which gutted a 28-storey building in China’s commercial hub, was sparked by “unlicensed welding carried out contrary to rules,” Xinhua, the official news agency, reported without citing a source.

The report did not say whether those detained were workers or managers.

The swift arrests come as authorities tackle public concern over why the fire took more than four and a half hours to extinguish.

“We feel that the fire rescue measures and methods weren’t fast enough, and secondly they weren’t vigorous enough,” Du Deyuan, a 66-year-old resident who was out when the fire broke out, said.

“People live in high-rises, and then you have this burn all the way from low down to the 28th storey, burnt so the whole building is blazing red. What could the people inside do?”

Shanghai’s rapid urban growth is throwing up vast numbers of new tall buildings, and while major fire disasters have been relatively rare compared to other developing countries, safety maintenance can be lacking.

“Controlling the blaze was very difficult,” he added, noting that lorries with ladders and extensions could not get close to the fire on Monday.

“Now is a period when fire disasters can easily occur and we have to conscientiously absorb the lessons of this disaster,” he told officials in Shanghai, according to the ministry’s website.

In addition to 53 confirmed killed, 70 residents were taken to hospital, including 17 with serious burns, said Xinhua.

Meng sought to head off public disquiet about the blaze in Shanghai, a city with an urban population of about 13 million.

A commercial building fire in northeastern province of Jilin earlier this month killed at least 19 people and injured 24.

In early 2009, a hotel being built next to the half-finished, modern new headquarters of Chinese state television in Beijing was consumed by fire after a fireworks display went wrong. One firefighter died. 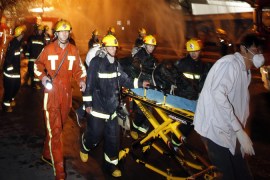 At least 53 people killed as fire engulfs 30-storey building under renovation in Chinese city of Shanghai.