Authorities in Bosnia and Herzegovina say police have arrested a suspect accused of taking part in the systematic execution of thousands of male civilians at the end of Bosnia’s 1992-95 war.

The state prosecution office said on Monday that 38-year-old Dragan Crnogorac was arrested in the northwestern city of Banja Luka.

Prosecutors say Crnogorac was a policeman who shot Muslim Bosniak men and boys who were rounded up by Serb troops in Srebrenica in July 1995.

The website of the prosecutor’s office said that Crnogorac was “suspected of committing the criminal offence of genocide under Article 171 of the Criminal Code of Bosnia and Herzegovina in the area of Srebrenica”.

Some 8,000 men were killed in just a few days after the town fell. The killing was the worst massacre in Europe since the Nazi era.

The Srebrenica massacre is among the indictments against Bosnian Serb wartime leader Radovan Karadzic, whose trial is in progress in The Hague, and against his fugitive army chief Ratko Mladic, believed by prosecutors to be hiding in Serbia. 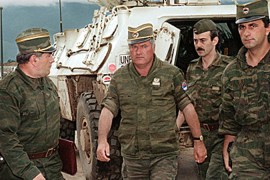