In her first political speech after being released from house arrest, Myanmar’s pro-democracy opposition leader Aung San Suu Kyi has announced that she may support the lifting of sanctions against her country.

She was addressing thousands of supporters of her National League for Democracy (NDL) at the party’s headquarters in Yangon, Myanmar’s main city, on Sunday – her first full day of freedom.

“I want to hear the voice of the people, after that we will decide what we want to do,” she told the people who greeted her as she got out of her car.

“We will work for the people to lift living standards,” she said. “I believe in human rights and I believe in the law.”

The politician said she felt “no antagonism” to those who kept her detained, and that she was “well treated” during her detention.

Aung San Suu Kyi said she is willing “to work with any democratic forces”, a sign that she is seeking to build support outside the NLD, which is an officially disbanded political party.

Al Jazeera’s special correspondent in Myanmar was in the crowd as Aung San Suu Kyi spoke.

The correspondent, who cannot be named for security reasons, said that there was no sign of increased police or military presence around the city before the speech, but there was chaos outside the NLD headquarters.

“When her vehicle arrived, it was literally impossible for her to open her door,” he said.

“There was very much a lot of pushing and shoving. Thousands of people have literally blocked the streets where the NDL is located.”

Her announcement that she is willing to change her stance on sanctions is a dramatic change, he said.

“In the past she has campaigned for sanctions. She thought this was the best way to force change from the outside,” he said.

It is yet to be seen whether the shift reflects a change in Aung San Suu Kyi’s overall strategy.

Our correspondent said that Sunday’s comments suggest that she may be adopting a reformist approach, rather than resuming her longstanding battle to leverage international pressure against the ruling generals.

Her tactics are likely to be decided in meetings that will be held in the days and weeks to come, as she travels around the country.

“What remains to be seen is whether she has had a change of heart,” he said. “The exact tactics are still to be determined.”

Speeches by Aung San Suu Kyi have, in the past, led to her arrest. This time, Al Jazeera’s Marga Ortigas reported from the Thai capital, Bangkok, she was more cautious and “not as fiery”.

“It seems that she is very careful not to have that happen again,” she said.

It also remains unclear what the government’s strategy is going to be, Michel Vatikiokis of the Bangkok-based Centre for Humanitarian Dialogue told Al Jazeera.

“The advice I am sure sh is getting from everyone is not to overplay her hand,” he said. “We’ve also seen in the past that traps are laid to justify re-imprisoning her.”

“She has to be careful to talking much more to the Burmese and less to foreigners.”

Aung San Suu Kyi will need to build communication with the country’s youth, he said, and clarify her position on the country’s ethnic tensions.

Meanwhile, expectations are running high among the many Myanmar citizens who live in exile near the Thai border, Al Jazeera’s Aela Callan reported from Mae Sot in Thailand.

“With the release of Aung Sung Suu Kyi, there is definitely a sense among the ethnic groups, among the refugees, among the former political prisoners, that this is just the beginning for them,” she said.

“Their excitement has been relatively contained, because they’re waiting to see what happens next.

“While there is a sense that Aung Sung Suu Kyi’s release will not dramatically change the lives of people in this region, there is real hope that she will be the one who can unite the various forces of opposition within the country, to bring them together and create change”.

About 20,000 people fled Myanmar to seek refuge in neighbouring Thailand after clashes between government troops and ethnic Karen fighters along the border were sparked by controversial general elections earlier this month.

The fighting erupted after widespread accusations that the November 7 elections – the country’s first vote in 20 years – was rigged by the military government, which some ethnic groups accuse of mistreatment.

She made a brief public appearance on Saturday shortly after her release from house arrest. Witnesses said hundreds of people rushed to her home after the authorities removed barbed-wire barricades in front of her compound.

“We must work together in unison to achieve our goal,” Aung San Suu Kyi told her supporters in an appearance at the gate of her compound, as the crowd chanted, cheered and sang Myanmar’s national anthem.

Almost 1,000 people, including journalists, had gathered near her lakeside house throughout the day, many chanting “Release Aung San Suu Kyi” and “Long live Aung San Suu Kyi”. Some wore T-shirts emblazoned with messages pledging to stand with her. 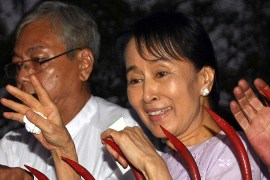 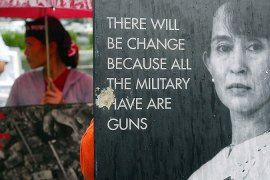 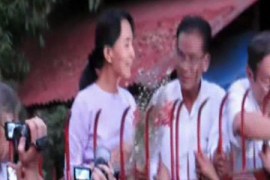