Police and protesters have fought pitched battles across cities in Bangladesh as a nationwide strike called by the main opposition party brought the country to a standstill.

More than 200 have been injured and nearly 300 have been arrested as police fired rubber bullets and used batons on Sunday to disperse activists of the Bangladesh Nationalist Party (BNP), who were protesting against the eviction of their leader and two-time prime minister, Begum Khaleda Zia, from her home.

Businesses and schools across the country were closed as a result of the shutdown.

The strike halted almost all transportation in Dhaka, a city of about 12 million people, just as the majority-Muslim country begins to celebrate the Eid al-Adha holiday.

A former commerce minister was among a dozen injured in Chittagong, the country’s main port city, while a police inspector was hit by a small bomb in northern Mymensingh city, local police told the AFP news agency.

A police van was burnt by a petrol bomb in Dhaka, where security was tight with at least 10,000 heavily armed policemen and 2,000 members of an elite Rapid Action Battalion out in force, police spokesman Walid Hossain said.

BNP supporters have accused the government of harassing Zia following her eviction from the residence she has occupied at army headquarters for around 30 years.

Zia’s residence in the sprawling compound was leased to her by the government in 1982, after her husband and ex-president, General Ziaur Rahman, was killed in an abortive coup. They had lived in the house for several years.

The current government of Sheikh Hasina Wajed, the prime minister, who leads the centre-left, secular Awami League party, cancelled Zia’s lease last year. They intend to build multi-storey buildings for families of army officers killed in a mutiny in a paramilitary unit headquarters in Dhaka.

Several thousand protesters skirmished with police close to Zia’s residence in the garrison area on Friday as the deadline for the expiration of her lease approached.

As Zia was driven from the compound, witnesses and security officials said up to 4,000 protesters armed with sticks and stones set fire to vehicles and attacked officers near the headquarters.

“They broke the front door, cut the grilles and then broke open my bedroom door. They dragged me out and pushed me into a car,” Zia said during a live television broadcast, wiping tears from her eyes.

“I was forced out with only one clothing. I was humiliated. They evicted me from my house breaking all rules and regulations. They also hit my family members,” she said.

Zia and her centre-right BNP ran the Bangladeshi government from 1991 to 1996 and again from 2001 to 2006. She was the first female prime minister in Bangladesh’s history.

After Zia’s most recent term expired in 2006, an army-backed caretaker government took countrol under emergency law, which was ended in 2008 with Hasina’s election. Hasina had been elected once previously, in 1996. 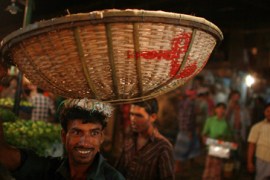 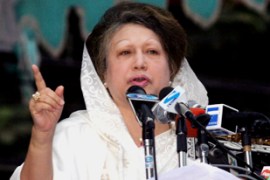