Hamid Karzai, the Afghan president, has appealed to the United States to reduce the visibilty and intensity of its military operations in Afghanistan.

In an interview with The Washington Post newspaper on Saturday, Karzai said that the long-term presence of foreign troops on Afghan soil could only worsen the security situation in the country and hit out at an increase in night-time raids by special forces.

“The time has come to reduce the presence of, you know, boots in Afghanistan … to reduce the intrusiveness into the daily Afghan life,” he said.

Karzai said that US troops must cease the night raids, which violate Afghan homes and encourage more people to join the Taliban.

“The Afghan people don’t like these raids, if there is any raid it has to be done by the Afghan government within the Afghan laws. This is a continuing disagreement between us.”

Karzai, who said during his inaugural speech last year that he would like to have full Afghan security control by 2014, said that the US military “should and could” draw down its forces next year.

The Afghan president made the remarks as suspected Taliban attacks killed at least one foreign soldier and two civilians.

The civilians were killed when a homemade bomb, attached to a parked motorcycle, exploded in the main market area of Spin Boldak, in the province of Kandahar on Sunday.

The Nato soldier, whose nationality was not released, was also killed by a blast in Spin Boldak. It was not immediately clear if the two incidents were related.

Meanwhile, at least 14 vehicles in a convoy of Nato fuel tankers were set on fire in eastern Afghanistan. Witnesses said armed men attacked the convoy in the Beshud district of Nangarhar and the drivers fled as the attack began.

“There were 16 fuel tankers in the convoy, 14 of them have been burned and two others have escaped,” Fazel Hadi, a police officer, said. 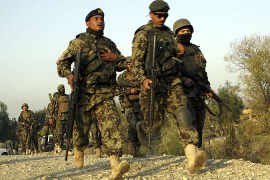 Raid on US airbase in Jalalabad repulsed while bomb blast in Kunduz leaves civilians and policemen dead. 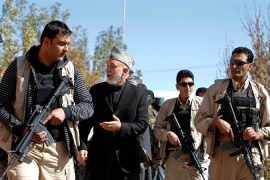 US defence secretary says Afghan president’s plans to assume responsibility for nation’s security by 2014 is realistic. 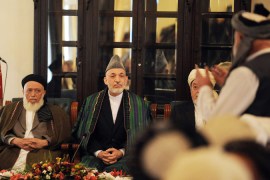 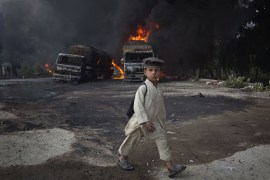