Saad al-Hariri, Lebanon’s prime minister, has vowed not to give in to “threats” after his Hezbollah rivals ramped up rhetoric against a UN-backed probe into his father’s murder.

“Nobody can threaten me to force my hand. I don’t act according to this logic. I don’t give in to threats,” al-Hariri told the Arabic-language service of Russia Today television ahead of a two-day visit to Moscow from Monday.

“I’m ready for calm and constructive dialogue, but if someone comes to me and puts a knife to my throat and tells me how to work, this is unacceptable, Lebanon is not like that,” he said, according to a transcript of the interview provided by his office.

Hassan Nasrallah, the Hezbollah chief, warned on Thursday that his powerful Shia group would “cut off the hand” of anyone who tried to arrest any of its partisans over the 2005 assassination of former premier Rafiq al-Hariri.

His comments were the latest in a heated campaign Hezbollah has launched to fend off an anticipated accusation by the UN-backed Special Tribunal for Lebanon (STL) against its high-ranking members
in connection with the assassination.

The foreign minister of Syria, one of the main backers of Hezbollah, said on Sunday that Damascus would accept any indictment that is based on solid evidence.

“The STL problem is a Lebanese affair and not a Syrian affair … but nobody will oppose an indictment that is based on irrefutable evidence,” Walid Muallem said in a meeting with diplomats in Damascus.

“The statements and press articles conjuring up (speculation) about the indictment before it is published aim to politicise the court and destabilise Lebanon,” he said.

Saad al-Hariri accused Syria of his father’s murder in the immediate aftermath of the bombing, at a time when Syria dominated Lebanon politically and militarily. He later dropped the accusation.

However, in his interview, al-Hariri cautioned that arrest warrants that Syria’s judiciary has issued against people close to him were “illegal”.

Leaders of regional powerhouses Syria and Saudi Arabia, which back Hezbollah and al-Hariri respectively, have met several times in an attempt to stem tensions in Beirut.

Muallem noted the “co-ordination” with Riyadh, but said it was up to the Lebanese to take care of their own country’s interests.

“Those who value stability and security in Lebanon must support Syria and Saudi Arabia… which are aiming to find a comprehensive solution to Lebanese divisions,” said the Syrian foreign minister.

Western countries have stepped up their backing for the tribunal, with the United States announcing a $10m donation to the court.

“They should also know that if the goal of violence is to stop the tribunal, it won’t work.”

Analysts have warned the standoff could lead to the collapse of the government and a repeat of the 18-month political deadlock that degenerated into deadly clashes and brought Lebanon close to civil
war in May 2008.

Rafiq al-Hariri was killed along with 22 other people in a Beirut bombing on February 14, 2005. 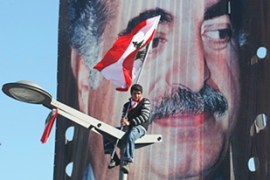 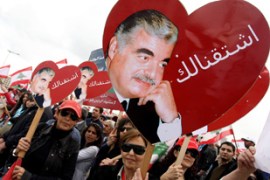 UN court to decide on release of Lebanese generals accused of assassination.