The last time Estela Domínguez of Mexico saw her daughter Estela Paz was in April 2006, when the young woman left home with the goal of reaching Las Vegas, Nevada.

Paz, who was 27 at the time, planned to cross the US border at the town of Altar in the northwestern state of Sonora. She was travelling without documents, and with her six-year-old son Emiliano. She was heading back to her job making bracelets. But she never made it.

“I talked to her on the phone just before she was to cross the border, but I never heard from her again,” Domínguez, a supermarket bagger in Córdoba, a city in the southeastern Mexican state of Veracruz, said.

“What I want most in the world is for her to come back, and for her children to see her again.”

Her grandson survived, and was reunited with his family when the “coyotes” or people smugglers contacted them in the US. He is now living with his aunt.

Domínguez, 57, joined a protest convoy of 13 members of the Network of Committees of Migrants and Relatives of Honduras (Red COMIFAH), which set out from Honduras on October 26 and reached the Mexican capital on the night of November 3.

The NGO estimates that some 800 Honduran migrants have gone missing over the last decade in Mexico, on their way to the US.

“We located one Honduran in Tapachula [a Mexican city on the Guatemalan border] and we have information about five other people,” Ian Quiroz, the executive secretary of Red COMIFAH, said.

“Our main objective is to find the people who are missing and also forge ties with local human rights organisations.”

The Honduran NGO took part in the Alternative World Forum for Peoples in Movement in the Mexican capital. Under the slogan “No Human Being Is Illegal”, the event drew scores of activists from the Americas, Europe, Asia and Africa.

The main issue on the agenda of the forum was the promotion and defence of the human rights of migrants, and the key event was an international tribunal which held a symbolic trial focusing on eight cases of abuse against foreign migrants committed in different parts of the world.

Some 500,000 undocumented migrants from Central and South America cross Mexico every year in their attempt to reach the US, according to estimates based on official statistics and figures from NGOs.

Along the way, they face the risk of arbitrary arrest, extortion, theft, assault, rape, kidnapping and murder, at the hands of youth gangs and organised crime, as well as corrupt police and other agents of the state.

Undocumented migrants cross the porous border between Mexico and Guatemala and ride what is known as the “train of death” through the southern states of Chiapas, Tabasco, Oaxaca and Veracruz, the most dangerous areas, before they head northwards towards the US border.

But perhaps the most horrifying face of the phenomenon is the disappearance of migrants. A recent report by the Mexican legislature’s committee on population, borders and migration affairs states that more than 60,000 Central and South Americans went missing between 1998 and 2008 in Mexico on their journey to the US.

In late August, 72 undocumented migrants from several Central and South American countries were killed on a ranch near the US border in the northeastern state of Tamaulipas, presumably by members of Los Zetas, a crime syndicate made up of former elite Mexican army commandos that dominates the kidnapping of undocumented migrants racket.

Names like those of Honduran migrants Junior Espinoza, Carlos Valle, Jorge Osorto and Brayan García have given a face to the tragedy.

Fifty of the bodies have been identified, including those of 32 Hondurans, 12 Salvadorans, four Guatemalans and two Brazilians. But nothing has changed since the mass killing, according to migrant rights advocates.

Recently, a train running between Oaxaca and Veracruz, carrying numerous migrants perched on the roof of the wagons as usual, was assaulted and a score of people were kidnapped, Catholic priest Alejandro Solalinde, one of the leading advocates for migrants’ rights, said.

Solalinde, who runs a shelter for migrants in the state of Oaxaca, said the authorities are still not doing anything to prevent or investigate the frequent kidnappings and assaults.

So far this year, 56,566 undocumented migrants have been detained in their attempt to make it to the US. Most of them were from Guatemala, El Salvador and Honduras, according to National Migration Institute (INM) statistics.

“Our chief demand is for the human rights of migrants to be respected,” Elvira Arellano, a Mexican representative of Familia Latina Unida Sin Fronteras, a Chicago-based immigrant rights organisation that emerged in 1987, said.

“We’ve had enough of being seen as the goose that lays the golden egg, because of the remittances we send home. We want solutions,” Arellano said.

Arellano, who lives in the west-central state of Michoacán, became a symbol of the fight for migrant rights after she took refuge for a year in the Adalberto United Methodist Church in Chicago, Illinois in defiance of a deportation order, to avoid being separated from her US-born son. She was deported to Mexico in 2007.

Her case, like the murders of the 72 migrants in Tamaulipas, is one of the cases that will be tried by a 20-member jury in the international tribunal, which held a first session October 7 to 9 in Quito, Ecuador.

“We defend the right to emigrate, and we condemn Mexico’s responsibility by omission in the massacre,” said Quiroz, whose convoy met with the members of the congressional committee on population, borders and migration affairs. 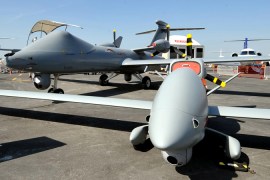 Drones may track migrants in EU

Europe’s agency for fighting undocumented migration has studied the possibility of using drones for border surveillance. 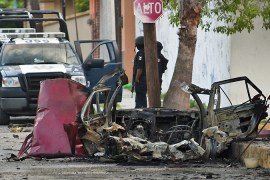