A Lebanese military court has convicted a Muslim cleric of terrorism charges and sentenced him in absentia to life in prison.

Omar Bakri Mohammed was among 54 people sentenced on Friday as part of ongoing trials against fighters who were allegedly involved in deadly clashes with the Lebanese army in 2007.

Bakri was convicted of “belonging to an armed group with the aim of carrying out terrorist acts and plotting to kill Lebanese soldiers”.

The cleric, who holds Syrian and Lebanese citizenship, lived in Britain for 20 years where he headed the now-disbanded group al-Muhajiroun [The Emigrants].

Bakri left Britain for Lebanon in 2005 and the British government barred him from returning.

Judicial officials said Bakri was sentenced to life because of his failure to show up in court for his trial.

Bakri, who lives in the northern Lebanese town of Tripoli, a hotbed of Sunni fundamentalists, said he was “shocked” to learn of the verdict through his lawyer on Friday.

“I never received any summons for a trial, or any arrest warrant,” he said, adding that the charges were “lies and fabrications”.

Bakri’s lawyer informed him he had 15 days to appeal the ruling, but the cleric refuses to hand himself in.

It was not immediately clear why authorities have not arrested Bakri, who appears regularly on television and does not live in hiding. Security officials declined to comment.

Bakri became a focus of British attention after he said he would not inform the police if he knew Muslims were planning attacks such as the July 7, 2005 bombings in London that killed 56 people.

The cleric, who also has been criticised in Britain for his fiery sermons, said his Muslim faith prevented him from reporting fellow Muslims to the British police.

Britain later said it had barred Bakri from returning to that country because his presence was not “conducive to public good”.

Bakri says he is now “retired” and spends his time preaching and teaching students and followers in Europe, Australia and Canada.

He appears often on local Lebanese TV stations as a guest on political talk shows, including an appearance last week.

“Everyone knows my address, I go on TV and army intelligence interrogate me after each TV appearance. Now all of a sudden Omar Bakri is a fugitive who failed to appear in court. Why?” he asked.

In addition to Bakri, 53 other people – 20 of them in absentia – received sentences ranging from one year to life imprisonment.

Muslim cleric Omar Bakri Mohammed, banned from Britain for his radical views, has called for capital punishment for cartoonists who dare depict the Prophet Muhammad. 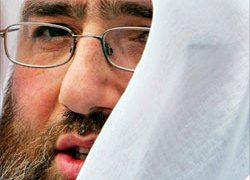 The UK-based Islamist preacher Omar Bakri has been released, a day after he was arrested by the General Security in Lebanon, according to State Prosecutor Said Mirza.