During a late-night session of the Iraqi parliament, politicians have returned Jalal Talabani to the largely ceremonial post of president and voted to make Osama al-Nujaifi, a Sunni Arab member of the Iraqiya coalition, the new speaker of parliament.

As expected, Talabani, the leader of the Kurdish alliance, nominated al-Maliki to serve another term as prime minister.

After Thursday’s developments, al-Maliki now has a month to form a cabinet and present his government to parliament for a vote.

In Iraq’s March 7 election, the Iraqiya list, led by the former prime minister, Iyad Allawi, won two more seats than al-Maliki’s State of Law coalition, but neither side won a majority, leading to eight months of political deadlock.

But just hours after leaders cemented the power-sharing agreement that seemed to smooth over lingering ethno-sectarian tensions, politicians belonging to Iraqiya left parliament.

A walkout was staged after al-Nujaifi declined a request to vote on removing three parliament members’ names from a list of those associated with deposed president Saddam Hussein’s Baath party.

Politicians claimed that removing the names listed by a “de-Baathification” committee was part of a broad power-sharing agreement that all sides in Iraq’s ongoing political dispute had agreed upon, Rawya Rageh, Al Jazeera’s correspondent in Baghdad, said.

“The new speaker observed that there was a lack of confidence about the sessions,” she said.

Al-Nujaifi, a member of Iraqiya who on Thursday was elected by his colleagues as speaker of parliament, would not allow the de-Baathification vote to occur until politicians chose a president.

But he declared that his loyalty was to Iraq’s parliament and no longer just to the Iraqiya list.

After Iraqiya members began the walkout, Al-Nujaifi joined them and left his two deputies – also just elected – to lead the session, Rageh said.

Allawi, who under the unity deal is expected to head up a new security council, also walked out. Al-Nujaifi eventually returned to the chamber.

The power-sharing deal, clinched after three days of heated talks, stipulated that a Sunni be speaker, and that al-Maliki and Talabani retain their posts.

The agreement established a statutory body to oversee security as a gesture to Allawi, who had held out for months to take the job from al-Maliki.

Iraqiya has said its participation hinged on four conditions: a bill forming the security body; a committee examining cases against political detainees; codification of the power-sharing deal; and annulment of the bans against the three Iraqiya members.

Iraqiya, a cross-sectarian political bloc, expressed hope it “would not be obliged to change its decision to participate in the political process if these conditions are not met”.

The backing of Iraqiya was seen as vital to preventing a resurgence of violence. 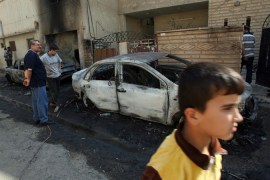 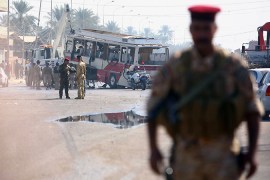 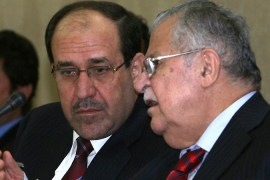