Amazon has sparked outrage for selling a self-published digital book called The Pedophile’s Guide to Love and Pleasure: A Child-Lover’s Code of Conduct on its website.

The reviews page for the “guidebook”, available for Amazon’s Kindle e-reader, were flooded with criticisms of the online retail company for offering it for sale.

Phillip R Greaves, listed as the author of the book , writes that paedophiles are misunderstood, as the word literally means to love a child.

He argues that it is only a crime to act on sexual impulses toward children, and offers advice that purportedly allows paedophiles to abide by the law.

“This is my attempt to make pedophile situations safer for those juveniles that find themselves involved in them, by establishing certain rules for these adults to follow,” the author writes.

“I hope to achieve this by appealing to the better nature of pedosexuals, with hope that their doing so will results in less hatred and perhaps liter [sic] sentences should they ever be caught.”

The majority of the 305 reviews posted on the site urged the online retail giant to remove the book for ethical reasons.

“This is a joke, right? What reputable business would even consider allowing this book to be sold from their website?” a visitor going by the pseudonym of “Emerald Storm” wrote.

“Shame on you, Amazon, for allowing a book like this to be uploaded for purchase!” another customer wrote.

“This book gives advice to people about something that is ILLEGAL in every state in this nation. It needs to be removed from the site immediately.”

A discussion group headed “I contacted the FBI and made a formal complaint” attracted more than 150 posts sharing advice on how to contact legal authorities.

Amazon defended the presence of the book, selling for $4.75, on the grounds of free speech.

“It is censorship not to sell certain books simply because we or others believe their message is objectionable,” the US company wrote in a statement.

“Amazon does not support or promote hatred or criminal acts, however, we do support the right of every individual to make their own purchasing decisions”.

But later on Thursday the company appeared to bow to pressure and pulled the page from its website.

Amazon allows authors to submit their own works and shares revenue with them. The company issues guidelines banning certain materials, including those deemed offensive.

Exactly what it considers “offensive” is not clarified.

The incident is not the first time Amazon has come under attack for selling objectionable content in its store.

In 2002, the United States Justice Foundation, a conservative group, threatened to sue Amazon, based in Seattle, Washington, for selling Understanding Loved Boys and Boylovers – a title that is still available on the site.

In 2009, Amazon stopped selling RapeLay, a video game in which the protagonist stalks and then rapes a mother and her daughters, after it was widely condemned in the media and by various interest groups. 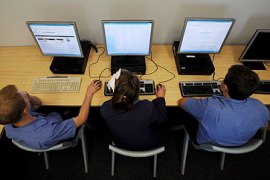 MySpace, the popular US networking website, is to upgrade its security for teenage members after concerns over child predators.

Police plan to patrol internet chatrooms as part of a multinational crackdown on paedophile rings.