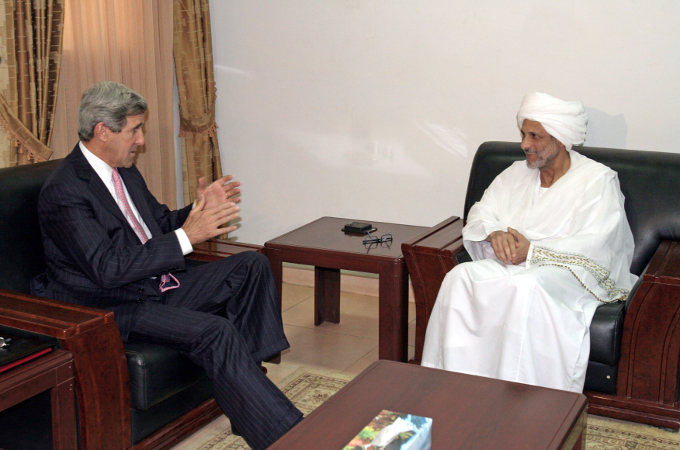 US senator John Kerry meeting with Ghazi Salah al-Din, an advisor to the Sudanese president [EPA]

Sudan, officially called a “state sponsor of terrorism” by the United States for 17 years, could finally shed that designation next summer – for doing something that has nothing to do with international terrorism.

The Obama administration announced earlier this week that Sudan could be removed from the “state sponsors of terrorism” list if January’s planned referendum on south Sudanese independence goes as planned.

A US state department official said on Sunday that Sudan would have to “hit these very important targets,” referring to a list of nearly 30 steps that will precede the referendum, including the registration of voters and the training of polling staff. (Many of them remain unmet.)

Senator John Kerry delivered that message to Sudanese officials late last week during a series of meetings in Khartoum. In a background briefing with reporters on Sunday, state department officials said the removal could happen as early as next summer. They described it as an “acceleration”: The administration had earlier offered to remove Sudan from the list in late 2011 or early 2012.

“We like to consider this a pay-for-performance operation,” one of the officials said.

The White House also dropped a previous demand: that Sudan end violence in the Darfur region before its removal from the list.

“We would also be decoupling the state sponsor of terrorism from Darfur and from the Darfur issue,” another official said.

The “state sponsors of terrorism” list, maintained by the US state department, currently includes three other countries: Cuba, Iran and Syria. Countries on the list are subject to severe economic sanctions.

Sudan was added in 1993 because it provided safe haven for al-Qaeda chief Osama bin Laden and for members of several other groups, including Hezbollah, Hamas and Egyptian Islamic Jihad.

In the 1990s, Khartoum took a few cosmetic steps to reduce those safe havens: It expelled bin Laden in 1996, for example, under intense pressure from the US and Saudi Arabia. At the same time, though, it ignored a UN resolution demanding it extradite three men who attempted to assassinate Egyptian president Hosni Mubarak in Ethiopia. And it reportedly continued to sponsor regional militant groups in central Africa.

Over the last few years, though, US officials say Sudan has changed its policies. In 2004, the Bush administration removed Sudan from a list of countries “not fully cooperating” with the US counterterrorism programme.

And the US state department’s own recent reporting on Sudan actually praises Khartoum for its counterterrorism efforts, and offers no evidence that Sudan continues to support international terrorist groups.

“Sudanese officials have indicated that they view their continued cooperation with the U.S. government as important and recognize the potential benefits of U.S. training and information-sharing,” the department’s 2009 report said.

State’s assessment went on to praise Sudan for investigating the murder of a US diplomat in Khartoum in January 2008, and for “work[ing] hard to disrupt foreign fighters from using Sudan as a logistics base and transit point for terrorists going to Iraq.”

The report does note that the Sudanese government has “welcomed Hamas members” and allowed them to raise money; the US government considers Hamas a terrorist organisation. Hamas, though, raises money in other countries in the Arab world – none designated as “state sponsors of terrorism” – and has contacts with numerous other governments, including Western countries like Switzerland.

It would not be the first time a country remained on the list for years after changing its behavior, though.

The state department, for example, reported in 2003 that North Korea – then a member of the list – “is not known to have sponsored any terrorist acts since the bombing of a Korean Airlines flight in 1987.” But it remained on the list until 2008, when Pyongyang promised to allow international inspection of its nuclear facilities.

The reverse has also been true: Countries have been removed from the list despite not changing their policies. Iraq was removed from the list in 1982 – when the US considered it an ally, and supplied it with arms during the Iran-Iraq War – only to be reinstated in 1990, when it invaded Kuwait.

But Saddam Hussein almost certainly continued to “sponsor terrorism” during that interregnum: The Mujahedin-e Khalq, for example, a militant group responsible for dozens of bloody attacks in Iran, has been headquartered in Iraq since 1986.

The “state sponsor of terrorism” designation offers the Obama administration a convenient “carrot,” an easy way to lift onerous economic sanctions from Sudan. But the administration’s offer shows that the designation is being used for purposes far from the original intent.