The official death toll following the eruption of Mount Merapi, Indonesia’s most volatile volcano, has climbed to 191.

Earlier estimates pointed to a death toll of 130 but disaster officials on Wednesday said that this did not included people who died of respiratory problems and heart attacks linked to the fiery mountain.

Muhammad Anshori, a disaster official, said that at least 600 people have been hospitalised, some with burns covering 95 per cent of their body.

Mount Merapi, located in the heart of Java island, roared back to life two weeks ago, shooting searing clouds of gray soot and debris up to six km into the air almost daily, with lava and rock cascading down its slopes.

Some people refused to leave the danger area around the volcano, however, more than 350,000 people have been evacuated to cramped emergency camps, set up by the Indonesian government. Many complained about poor sanitation, saying the toilets and water are filthy.

Barack Obama, the US president, sliced several hours off his whirlwind 24-hour tour to Indonesia over concerns about the volcanic ash, which has been carried by westerly winds toward the capital, Jakarta. He flew to South Korea for the Group of 20 summit.

Safety concerns also prompted several international carriers to again cancel flights into and out of Jakarta, 450 km from Merapi, Syaiful Bahri, who oversees operations at the airport, said.

Among them were Cathay Pacific, Value Air and Qantas.

Merapi has erupted many times in the last century, killing more than 1,400 people. On Friday, it experienced its most explosive blast in more than a century.

At least one yet-to-be evacuated village was incinerated, setting on fire people, livestock, houses and trees.

Indonesia, a vast archipelago of 235 million people, is prone to earthquakes and volcanoes because it sits along the Pacific “Ring of Fire”. 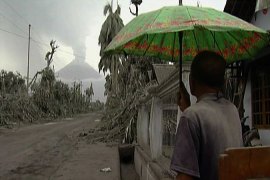 Searching for survivors at Merapi 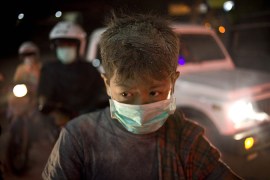 Thousands of villagers around the volcano have fled their homes.

The country’s foreign minister discusses the devastating eruption of the volcano, Mount Merapi. 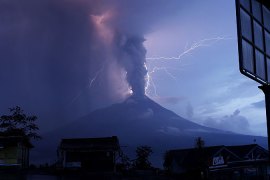