“The rise in economic freedom in China in recent years has been hugely beneficial to China and to the world,” he said in a speech at Peking University on Wednesday.

“I hope that in time this will lead to a greater political opening … because I am convinced that the best guarantor of prosperity and stability is for economic and political progress to go in step together.”

His comments come a day after Chinese officials barred the lawyer for Liu Xiaobo, a Nobel peace prize winner jailed for calling for political reform, from travelling to Britain.

Some British press have viewed Cameron’s comments as direct condemnation of the Chinese government’s human rights record, but Paul Brennan, Al Jazeera’s correspondent in London, said the remarks were “frank dialogue rather than criticism”.

“David Cameron has been under significant domestic pressure to raise the issue of human rights with his Chinese hosts, but without going so far as to sour what has been a highly successful trade visit.

“His political aides will hope that the measured tone of his speech to Beijing students will be enough to appease both sides,” he said.

Cameron did not specifically mention Xiaobo or any cases of political repression during his speech, but is believed to have brought up the case of Xiaobo in meetings with Wen Jiabao, the Chinese premier.

He also talked about the virtues of the rule of law and Western-style democracy in Communist Party-ruled China, noting that a British government was always subject to the rule of law.

“At times they can be frustrating when the courts take a view with which the government differs,” he said.

“But ultimately we believe that they make our government better and our country stronger.”

He added that having free media was important despite the criticism and discomfort it sometimes brings for governments.

Cameron is the first Western leader to visit China since dissident Liu was awarded the Nobel Peace Prize on October 8 – an honour hailed in the West but condemned by Beijing as tantamount to “encouraging crime”.

The British prime minister also called on Beijing to exert more pressure on Myanmar, which has just held elections condemned as a farce by the West, to improve the human rights situation there.

“I believe China can work with us to improve the situation for the Burmese people,” he said.

“China is one of the few countries that Burma [Myanmar] will listen to on this point.”

His speech comes on the second and final day of a visit focused on boosting business ties as part of Cameron’s stated aim of doubling bilateral trade by 2015 to more than $100bn.

The British prime minister, who is travelling with Britain’s largest-ever delegation of bosses and ministers to China, wants to take their trade relations “to a new level”.

By far the biggest deal announced on Tuesday was worth $1.2bn between Rolls-Royce and China Eastern Airlines Corp under which the British group will provide jet engines to power 16 Airbus A330 aircraft.

Cameron is travelling with 43 bosses from major British companies and four government ministers on his first official visit after taking power in May.

However human rights advocates have accused Cameron of soft-pedalling political criticism of his hosts as he pursues trade ties. 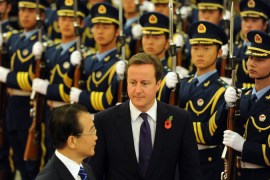 UK PM visit to China is crowned by a $1.2bn deal between UK Rolls-Royce and China Eastern Airlines.