Dmitry Medvedev became the first Russian leader to visit the Kuril Islands on Monday. The islands, which lie north of Japan’s Hokkaido island, have been controlled by Moscow since they were seized by Soviet troops at the end of World War II, but Tokyo claims the southernmost four as Japanese territory.

Naoto Kan, Japan’s prime minister, said that Medvedev’s visit to the islands, known in Japan as Kunashiri, was “regrettable”.

“Japan’s stance is that those four northern islands are part of our country’s territory,” he told a parliamentary panel.

“I told him that it is Russia’s domestic issue. I requested Japan to deal with it cool-headedly and in a balanced manner,” Bely told reporters after meeting with Maehara, Japanese news agency Jiji reported.

The row over the islands has coloured relations between Tokyo and Moscow since World War II, preventing the signing of a formal peace treaty.

“What’s central to this ongoing dispute is the strategic importance of these very small islands, which only really are inhabited by Russian fishermen,” Al Jazeera’s Neave Barker, reporting from Moscow, said.

“Whoever controls these islands controls lucrative fishing rights in the surrounding waters. These islands are also very close strategically to existing oil and gas reserves, making them very important to the Russian side.”

Japan refers to the islands as its Northern Territories, but Moscow insists they belong to Russia.

Sergei Lavrov, the Russian foreign minister, denied on Saturday that Medvedev’s trip to the disputed isle, which comes ahead of a Asia-Pacific Economic Cooperation (APEC) leaders summit in Japan in mid-November, was politically charged.

Analysts, though, said the visit appeared intended to bolster Medvedev’s image at home.

The dispute over the islands has long-been subject of discussion between the two countries, but there has been no sign of a breakthrough for years.

Most people in the islands depend on fishing for their livelihood and Japan, a major fish consumer, would gain rich fishing grounds if the islands were returned.

Senior Russian officials including Lavrov have visited the islands. In 2005 the European Parliament adopted a resolution urging Russia to return the islands to Japan. 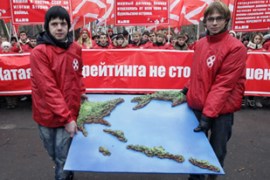