Iraqi political leaders have begun a meeting aimed at breaking an eight-month deadlock over the formation of a new government and assure Nouri al-Maliki, Iraq’s incumbent prime minister, a second term in office.

Iraq has been without a government since elections on March 7, when the Sunni dominated Iraqiya bloc won 91 seats and al-Maliki’s State of Law took 89.

Many analysts say the next government needs a component that represents the country’s minority Sunnis if it is going to try and heal old sectarian wounds.

They argue that excluding Iraqiya from power could anger its Sunni voters and reinvigorate a Sunni backlash.

Hillary Clinton, the US secretary of state, said on Monday that the US hopes Iraq’s political factions are near the end of their haggling and close to forming an inclusive government that represents all interests.

“It is fair to say that we have been consistently urging the Iraqis to have an inclusive government that reflects the interests and needs of the various segments of the population, that there had to be legitimate power-sharing amongst different groups and individuals,” Clinton said.

The recent rise in violence and eight-month power vacuum is prompting fears of an increase in sectarian strife,as US forces scale back their presence ahead of a full withdrawal next year.

Al Jazeera’s Rawya Rageh, reporting from Baghdad, said that despite the lack of a political resolution “all the speeches struck a conciliatory tone”.

However, “the devil is in the details,” she added.

Last week, a series of explosions across Baghdad, the Iraqi capital, killed at least 63 people and wounded 285 others.

“The unfortunate deadly incidents in a way are credited for providing some sort of impetus for this political process to take off,” our correspondent said.

Ahmet Davutoglu, the Turkish foreign minister, met with Barzani on Sunday and reiterated Turkey’s support for his initiative to bring together the leaders of the four alliances, saying he was eager to “see all Iraqi ethnic and political groups gathered around a table to pave the way for the formation of a government in Iraq”.

Iraqiya had said it will not take part in a government led by al-Maliki and raised the possibility it might boycott a parliament session set for later this week.

But senior leaders of Iraqiya said on Monday they expected they would ultimately agree to join forces with al-Maliki, while a group of legislators within the bloc warned they would split from it if it did not.

Al-Maliki’s coalition has merged with other Shia groups and reached deals with minority Kurds, paving the way for him to retain power. It also has assurances of support from small Sunni-based factions.

Iraqiya’s likely change of heart was seen as a sign that it now recognises that al-Maliki’s alliance has enough backing to form a government without it.

“There is a tendency to participate in the government,” Osama al-Nujaifi, a senior Sunni Arab leader of Iraqiya, said.

“There are signs of a deal … There are still discussions about reforms and power sharing.”

Under an expected deal, al-Maliki would remain prime minister and Jalal Talabani, a Kurd, would retain the presidency.

Iraqiya could be offered the speaker’s post in parliament, the foreign ministry and a role with possibly expanded authority over defence issues, the economy and foreign affairs.

“The speakers have said, one after another, that they would like to see a government formed as soon as possible in order to prevent the security situation from getting any worse – and in order to prevent insurgents and fighters from capitalising on this political vacuum,” Rageh said.

The political leaders want to strike a broad agreement before Thursday’s parliamentary session.

Parliament has sat only once – in June for 17 minutes – since the election.

The country’s highest court last month ordered legislators to get to work and resume sessions, putting pressure on Shia, Sunni and Kurdish factions to accelerate efforts to reach an agreement. 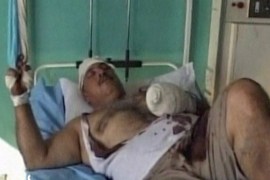 Investigation follows security breaches that preceded bombings that killed at least 64 people in the capital Baghdad.