Myanmar is set for its first general elections in 20 years, but opposition parties still in the fray are already questioning the fairness of the vote.

In the run-up to Sunday’s vote, the All Mon Region Democracy Party and the Rakhine National Development Party (RNDP) have accused the military-backed Union Solidarity and Development Party (USDP) of “cheating” and “threatening” voters.

They have threatened to contest the result of the elections unless their complaints are dealt with.

The USDP, formed by ministers who retired from the military in April, has allegedly been helped by local authorities to force people to vote early and for the military-backed party.

Some 29 million people are registered to vote in the elections that many foreign governments consider to be a “sham” to keep the military junta in power.

Other political parties have also raised concerns over the poll.

Thu Wai, the Democratic Party chairman, said on Friday that his party was “deeply concerned” about stories of voter intimidation across the country and has filed an official complaint.

“We have learnt that the USDP together with ward authorities are trying to get advance votes by cheating, bribing or threatening people,” said a letter from the party to the Union Election Commission in the capital, Naypyidaw.

“If the USDP wins the polls due to the influence and resources of the government, then ethnic and other pro-democracy parties will boycott the election results,” Aye Maung, the RNDP chairman, was quoted as saying to exile news website Irrawaddy.

Two parties aligned to the military are together fielding about two-thirds of the total candidates and the weakened opposition has a slim chance of success with Aung San Suu Kyi, Myanmar’s democracy icon, under house arrest.

She swept her party to power in 1990 but the results were never recognised by the ruling generals.

Signs of voter intimidation were also reported by the Chin Human Rights Organisation, which said that in a ward in Chin state, in western Myanmar, one of the polling stations was at an army checkpoint.

“How can people feel free to vote for the party of their choice if soldiers are watching them?” Salai Za Uk Ling, the programme director, said.

The military-leadership was feared to be intentionally blocking access to information, with the Internet down across Yangon, the country’s largest city, on Friday.

Many people in Myanmar, a country where almost one-third of the population lives below the poverty line, prioritise basic needs over politics, while a lack of choice has generated political disillusionment.

In a speech reproduced in the state mouthpiece, the New Light of Myanmar, on the eve of the election, Thein Sein, the Myanmar prime minister, urged citizens to vote and not to “tarnish the images of the state”.

However, Al Jazeera’s special correspondent, reporting from Yangon, said there is still very little sign that there are elections coming up.

“Travelling around the city of Yangon, there is the odd election poster around the city. But that is about the only sign that elections are upon us,” the correspondent said.

“And we certainly did not see any increased security inside the city, which was something that we did expect to see.”

Few outsiders will be there to bear witness because foreign election observers and international media have been barred from entering the country for the election.

European diplomats have also snubbed official polling-station visits, declining an invitation to join what Andrew Heyn, the British ambassador, has already dismissed as a “choreographed tour”.

Speaking to Al Jazeera on Saturday Heyn said there was cause for concern in the upcoming elections.

“It is hard to say too much positive things about these elections. The atmosphere on the ground is incredibly flat. What we are seeing here is that these elections are a major missed opportunity.

“We have had some ethnic parties excluded, elections laws which are very restricted, and Aung San Suu Kyi and over 2,100 other political prisoners unable to participate in this elections.

“So it is little wonder the public is cynical.” 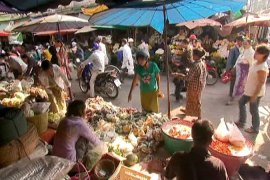 Thousands seeking refuge in Thailand struggle to survive but see no hope for change despite vote. 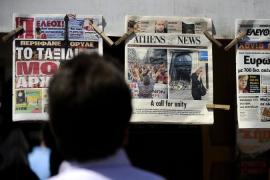 Just across the border in Thailand, Myanmar dissidents meet to reminisce about the lives they left behind. But there are no regrets. 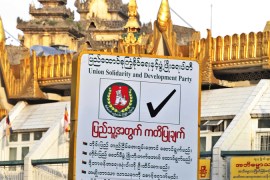 What impact will boycotts and threats from ethnic minority groups have on the vote in the military-led country? 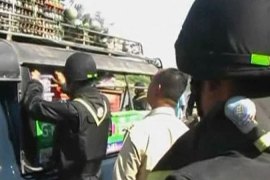 In the run-up to Sunday’s general elections, neighbouring Thailand decides to beef up military presence.