Protesters have clashed with police in Germany while trying to halt a train carrying nuclear waste to a storage site.

The confrontation occurred on Sunday near the northern town of Dannenberg. Riot police faced off a crowd of at least 1,000 forcing their way onto the tracks ahead of the train. Some protesters poured flammable liquid on a police vehicle and set it alight.

Police used water cannons and pepper spray to break up the crowd, but some protesters managed to get onto the rail line.

The train began its journey from France, where the 123 tonnes of nuclear waste originating in Germany have been reprocessed. It is destined for Dannenberg, where the waste was to be loaded onto lorries for the final leg of their journey to a disputed storage site at Gorleben.

Activists claim neither the containers used for the shipment nor the Gorleben facility are safe.

At least 25,000 people demonstrated outside Dannenberg on Saturday.

In television footage of Sunday’s clash, helmet-clad police were seen punching activists and hitting them with truncheons.

Another spokesman said there were injuries among both protesters and police. One protester was evacuated by helicopter to hospital after being wounded in nearby Harlingen by the horse of a mounted police officer and apparently suffering from a broken shoulder.

Separately, about 50 to 60 tractors blocked the main road between Dannenberg and Gorleben, where the waste will be stored eventually, but they were cleared away by police. The roughly 20km road was lined with police vehicles.

Wolfgang Ehmke, a spokesman for a local anti-nuclear group, said blockades aimed “to delay the arrival of the shipment and at the same time mess up the timetable for the [government’s] nuclear policy”.

Protests greeted the train as it passed through central Germany earlier on Sunday.

Near the town of Morschen, a pair of activists rappelled off a 75-metre-high bridge holding an anti-nuclear banner, while about 50 others crowded onto the tracks, according to Cora Thiele, a federal police spokeswoman.

The protest stopped the train, but police hauled the demonstrators away and the train continued. The two protesters who rappelled from the bridge and three others were taken into custody, Thiele said.

Elsewhere, police had to dislodge three protesters who had chained themselves to the tracks.

Germany receives similar shipments roughly every year, but this time protests have been stronger than usual because of the government’s decision to extend the life of the country’s atomic power plants by an average of 12 years beyond the original shutdown set for 2021. 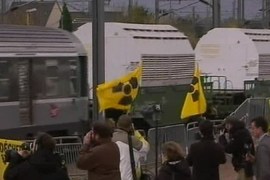 Thousands rally against a highly radioactive train shipment which protesters say will not be stored safely.