A train carrying a large load of highly radioactive nuclear waste has crossed the river Rhine from France into Germany, after switching route to avoid protesters trying to block the tracks.

Anti-nuclear activists had been expecting the train to head north to the French border town of Lauterbourg before crossing the frontier on Saturday, but the train instead crossed via the the Kehl bridge near Strasbourg.

The 14-wagon train was travelling under high security, with German riot police on board, French special forces on the bridge, a police launch under the bridge and a helicopter overhead.

The shipment was temporarily halted on Friday when demonstrators in the French city of Caen chained themselves to tracks in the train’s path to prevent it from moving.

Activists claim the 123 tonnes of waste on board makes the train “the most radioactive ever” and say the German site that will hold it is unsafe. But the French nuclear firm Areva insists the shipment
is not unusual.

The waste is returning to the Germany, where it was used to generate electricity, after being treated at a plant in France by Areva.

Germany receives nuclear waste shipments roughly every year under an agreement that sees spent fuel sent to France for reprocessing and returned for storage.

Thousands of people gathered for a rally in Dannenberg, the northern German town where the waste was to be unloaded from train to lorries for the last leg of its trip to a storage facility at Gorleben.

“The reason so many people are angry this time is that the government announced in the 1990s that it would be essentially running down the nuclear plants, that they would be closed sometime early in the 21st century,” Al Jazeera’s Alan Fisher, reporting from Dannenberg, said.

“But just last year it was decided that this wasn’t practical, and that the nuclear power plants would have an extended life of somewhere in the region of 15 to 20 years. Angela Merkel’s government passed a motion just last week which said those power plants will continue their operations beyond the lifespan every one thought.”

Organisers said 50,000 people took part in the rally, but police said there were more than 10,000. Demonstrators listened to speeches and music while others made plans to at least temporarily stop the convoy before it reaches Gorleben.

“Merkel provoked society by extending the lifespan of nuclear power and this is the people’s answer,”  Juergen Trittin, a leader in the Greens party, said.

Smaller protests were to be held in other German cities.

Merkel urged those taking part in protests to refrain from committing criminal acts while attempting to stop the train.

“There are of course limits which need to be set, things that may seem harmless, like removing the gravel from train tracks, this is not a peaceful demonstration but rather it is an offence. I want
to say this just now, because it puts other people in danger,” she said.

Germany gets 23 per cent of its energy its 17 nuclear power plants. 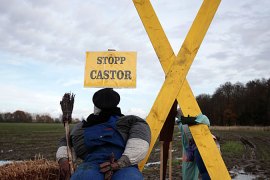 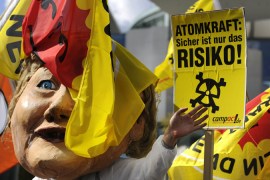 Cabinet decision means some nuclear power plants will now be operational until the 2030s.